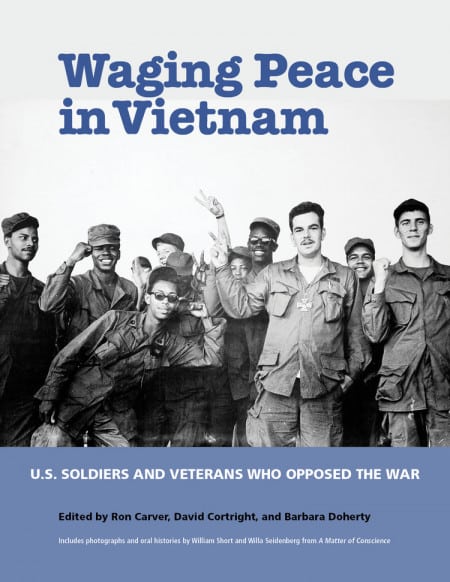 The International Security and Conflict Resolution (ISCOR), in partnership with the Center for War and Society, announces that it will host a new exhibit at San Diego State University (SDSU) from March 8-28 (Donor Hall Library), featuring photographs, underground newspapers, oral histories, and documents from this little-known movement. In addition to the exhibit, there will be two panel discussions. Both panels will be held in Room 350 San Diego State University, College of Professional Studies & Fine Arts Building.

Susan Schnall, Navy Lieutenant court-martialed and sentenced to six months hard labor for leading an antiwar march down San Francisco’s Market Street in October 1968 alongside 500 active-duty soldiers and sailors. Her protest inspired others and from that day on, every major U.S. peace march was led by soldiers and veterans. Susan Schnall is president of the national board of Veterans For Peace.

John Kent, Annapolis graduate and Vietnam War veteran, trained as a jet fighter pilot but turned in his wings and refused to deploy for a second tour in Vietnam. Stationed in San Diego until his discharge, he co-founded the Concerned Officers Movement.

David Cortright and other soldiers stationed at New York’s Fort Hamilton were punitively transferred to bases throughout the country for their antiwar activities and for refusing to forbid their wives to oppose the war. Cortright, a professor at the University of Notre Dame, is the author or editor of more than 20 books, including Soldiers in Revolt and Waging Peace in Vietnam: U.S. Soldiers and Veterans Who Opposed the War. Cortright is currently circulating a letter from American veterans who opposed our war in Vietnam to Russian soldiers, calling on them to heed their consciences and oppose their government’s unjust war.

William Short, a Vietnam War combat veteran, was twice court-martialed and sentenced to the American stockade in Long Binh, Vietnam, when he refused to return to battle after he and his company were instructed to desecrate the bodies of Viet Cong soldiers they killed. Returning to the United States, he joined Vietnam Veterans Against the War.

Speaking at the University of San Diego’s Copley Library *

March 16 (the 54th anniversary of the My Ly Massacre):

Ronald L. Haeberle, the Army photographer whose color pictures of the My Ly Massacre published in the Dec. 5, 1968, issue of LIFE Magazine, galvanized American public opinion against the war. Haeberle was subjected to harassment and, along with Hugh Thompson, the American helicopter pilot who tried to stop the massacre, was called before a Congressional Committee, some of whose members were hoping to have the Army prosecute them for intervening and exposing the slaughter of 504 non-combatants: women, children and babies.

Speakers from both events are available for media interviews.

They will be speaking in conjunction with exhibits at both universities (see the attached announcements) sponsored by professors at USD and SDSU; by San Diego’s Hugh Thompson chapter of Veterans For Peace; and the Waging Peace in Vietnam Education Fund. See attached programs or visit www.WagingPeaceInVietnam.com

The Secure Community Network has been building a shield over US Jewish communities. It saved lives in the Texas synagogue attack