Home WORLD SECURITY NEWS ‘We all will be judged.’ Russian prisoners of war voice disquiet, shame over war in Ukraine 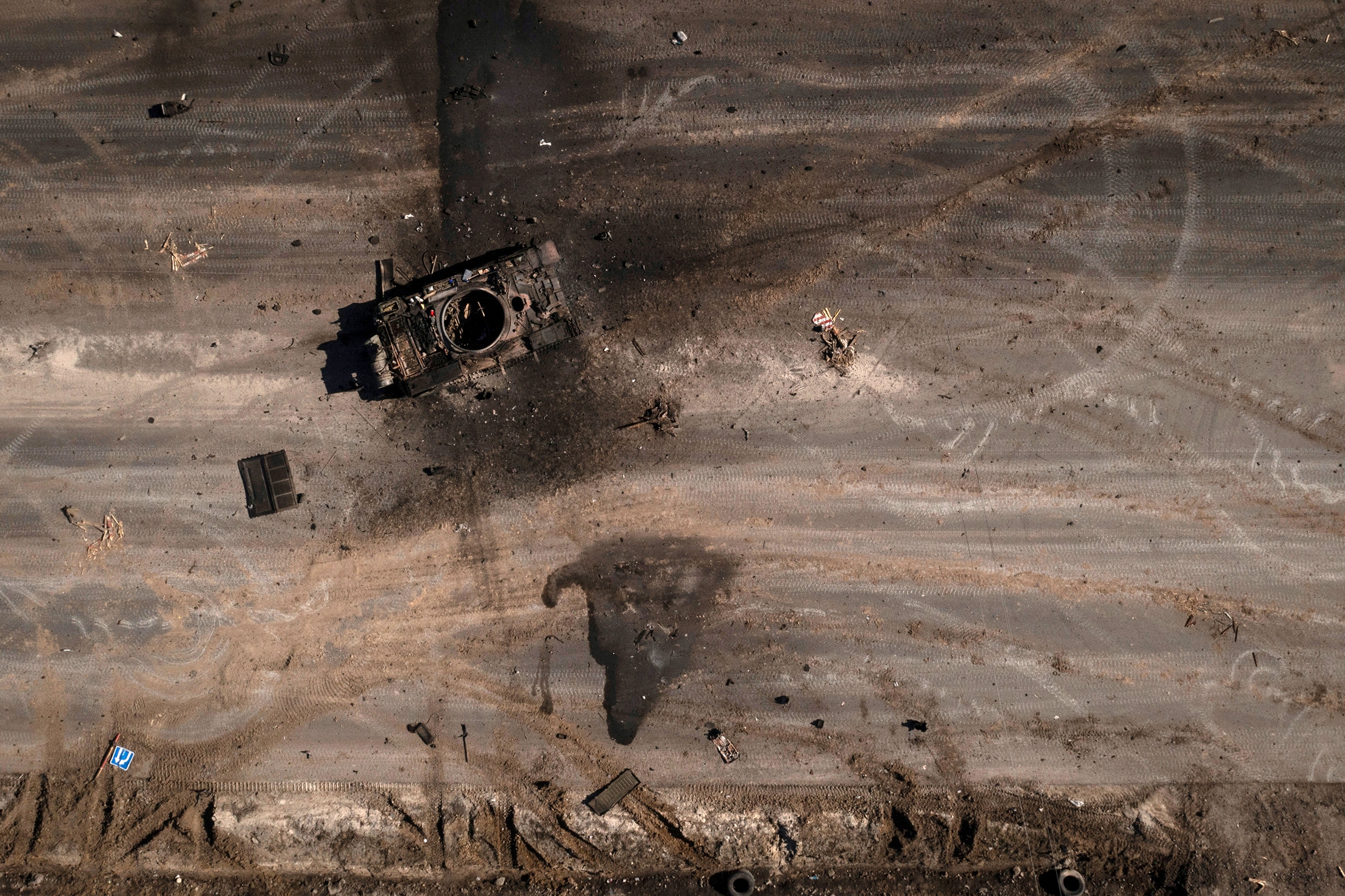 (CNN) — “I want to tell our commander-in-chief to stop terror acts in Ukraine because when we come back we’ll rise against him.”

Russian President Vladimir Putin “has given orders to commit crimes. It’s not just to demilitarize Ukraine or defeat the Armed Forces of Ukraine, but now cities of peaceful civilians are being destroyed.”

“The crimes that we committed; we all will be judged.”

These are the voices of Russian prisoners of war now held by Ukraine.

Nearly a dozen have appeared in news conferences held by the Ukrainian authorities, just a few of the 600 that Ukrainian President Volodymyr Zelensky says have been captured.

Their public appearances may be questionable under the Geneva Conventions, which forbid states from causing unnecessary humiliation to prisoners of war. And it is possible that they felt pressure to express views sympathetic to those of their captors.

But three captured Russian air force pilots who spoke to CNN did not suggest they were speaking under duress.

CNN requested access to speak with the prisoners with the Ukrainian Interior Ministry. That request was made prior to a press conference that took place in Kyiv on Friday. CNN spoke with the three men immediately after that press conference.

CNN were the only journalists in the room and at no time did Ukrainian Security Services, who were in the room throughout, interject or direct CNN or the prisoners to ask or answer specific questions. The interview was conducted in Russian.

The prisoners were not handcuffed, and while they didn’t move from their seats, seemed to be under no physical restraint.

We are reporting the contents of this interview as there appears to be a common thread appearing from other Russian prisoners of war speaking following their captures — that this is not a war they want to be fighting.

The three pilots sat around a table. One of them had a gash in his forehead, which he said had been sustained before his capture.

“The treatment has been acceptable. They’ve offered us food and drink. They offered medical treatment,” said one pilot, whose first name is Maxim.

CNN’s interview with the three Russian captives revealed that they had deep disquiet about their mission and the suffering of Ukrainian civilians. They also had harsh words for their commander-in-chief, Putin.

And they spoke of tearful calls home.

Their testimony appears to support western assessments that there are morale issues among at least some Russian troops in Ukraine. On March 1, a senior US official said the US has “indications that morale is flagging in some” of the Russian units.

“They again did not expect the resistance that they were going to get, and that their own morale has suffered as a result,” the official said.

Maxim, an officer and fighter-bomber pilot, did most of the talking. He looked bruised and very pale but spoke lucidly in the tone of a professional soldier. CNN is using only the first names of the prisoners of war for their own protection.

He said he had only received his “secret combat order” the day before Putin announced the “special military operation” against Ukraine.

The pilots were asked what they thought about Putin’s claims that Ukraine was run by neo-Nazis.

“I think it was invented as a pretext and is something that the world cannot understand,” Maxim said. “But Putin and his circle need this in order to achieve their own objectives. One such step was that it would be beneficial for them to spread disinformation about fascism and Nazism.”

“We didn’t see any Nazis or fascists. Russians and Ukrainians can communicate in the same language, so we see the good (in these people),” Maxim said.

“It’s hard to give a direct assessment of his actions. But, at the bare minimum, judging by the consequences of his orders, he is incorrect.”

At a different media briefing in the same venue, a reconnaissance officer called Vladimir who had been captured told a group of international reporters, “Our government told us we need to liberate the civilian population. I want to tell Russian servicemen: lay down your arms and leave your stations, don’t come here. Everyone wants peace here.”

Vladimir then went a big step further, saying: “I want to tell our commander-in-chief to stop terror acts in Ukraine because when we come back we’ll rise against him.”

Another reconnaissance officer at the same event echoed the sentiment, addressing Putin directly.

“You won’t hide this for long. There are many like us here. Sooner or later, we’ll come home.”

Speaking to CNN, Maxim, the pilot, became emotional about the suffering inflicted on civilians since the invasion.

“It’s not just about demilitarizing Ukraine or the defeat of the Armed Forces of Ukraine, but now cities of peaceful civilians are being destroyed. Even, I don’t know, what can justify, f**k, the tears of a child, or even worse, the deaths of innocent people, children.”

He said they were aware of what had happened in places like Mariupol, where nearly 1,600 people have been killed since the invasion began.

“It was a horrifying fact, not just because it is a crime. It’s vandalism. You cannot forgive such things. To bomb a maternity ward?” he said.

“It’s the most perverse f**king form of neo-Nazism, neo-fascism. Who could think of such a thing?”

Another pilot, whose first name is Alexei, added quietly, “It’s not really up to us, who to bomb, what to bomb. It’s a command.”

Maxim and his fellow pilots suggested there was widespread disquiet about the Ukraine offensive.

“I know in my unit, they are totally against it,” Maxim said.

“They have many relatives and friends [in Ukraine], and they were told it was an operation localized to the DNR [the breakaway Russian-backed Donetsk area], and not an attack on the whole country. My division was totally against it.”

“If Ukraine wanted to become part of Russia, to strike up some cooperation — by all means. No one would be against that. But to force them is just not acceptable.”

Neil Greenberg is a professor of defense mental health at King’s College London. He served in the UK Armed Forces for more than 20 years and has deployed, as a psychiatrist and researcher, to a number of hostile environments.

“What’s interesting from a psychological point of view is that the average soldier doesn’t often have the political ideals of whoever runs the country. So if you ask soldiers why they do what they do, they often say they do it because they are fighting for each other — we are a band of brothers and therefore we are going to do what we do because we are following orders and we look after each other,” he added.

“It’s unlikely that they would have the same ideals as Putin so it would be wrong to think automatically that those views were not true.”

Another soldier held by the Ukrainians told a separate media briefing of his artillery unit’s entry from Belarus down the road to Chernihiv. He teared up as he spoke of meeting locals who told his unit to go home, and said, “There are no fascists here.”

He also spoke of confusion among units. His group became stuck in a swamp and had to destroy their infantry fighting vehicle. They wandered on foot for several days before reaching a village and surrendering after an exchange of fire.

Another Russian soldier — in a video released by Ukrainian media — said he had crossed from Crimea on the first night of the offensive.

The unnamed soldier, who said he was 22 years old and gave his unit’s number, said it was soon obvious that “we are not here as peacekeepers, but to fight. We asked commanders what the f**k we are doing here. We couldn’t turn around and leave. Behind were the echelons [units] that kill deserters.”

The soldier said, “We were told there were no civilians in every settlement. But they were there. It worried us.

“We had already realized that missiles were flying at the civilian population, against ordinary towns but not on military facilities. Although we were told quite the opposite. So, we surrendered.”

Maxim said he had received his combat orders the day before Putin announced the invasion.

And then, he said, there was a surprise.

“The order was canceled. Part of the air force that had already taken off had to turn back. We were happy and thought that maybe things had been resolved peacefully.”

He was wrong — and soon received a list of coordinates for targets in eastern Ukraine, around Izium and Chuhuiv.

He said he was not sure what he was hitting. “It’s impossible to really know what is beyond our state borders. For example, they mark down a column of tanks. But we cannot be sure if there is really one there or not.”

CNN has analyzed multiple instances in which air-dropped bombs have hit civilian areas in Ukraine since the invasion began on February 24.

“I just used the usual explosive bombs, made of cast iron… the same kind that were used during World War Two with some changes here and there over the years. There are more modern ballistic varieties, of course, but the fact remains that we did not use those,” Maxim added.

Last week, US and NATO officials said Russia had relied far more heavily on less sophisticated, so-called “dumb bombs” than it has on its arsenal of precision-guided munitions.

Other Russian soldiers captured by the Ukrainians have also spoken of last-minute orders.

Sergey, who was with an artillery unit, said in an earlier media briefing that “at 10:00 am on the 23rd (of February) they were lined up and told by the commander about Putin’s order to attack Ukraine, seize Kyiv and “protect the population against the fascism and tyranny in Ukraine.”

The pilots who spoke to CNN were uncertain about how the war would end.

“I hope our superiors have control over the circumstances. How things are going to develop in the future, to make a wish for some outcome, I’m not going to do that here, to say what I want,” Maxim said.

He also spoke of his first contact with family back home.

“I said ‘I’m alive’ because it was our first conversation. I told them: ‘I’m alive and being held captive.’

“We talked about personal things. About our kids, the home; not about military stuff.

“Of course, we really want to see our families and loved ones. To meet with them. And hug them because they are worried.”

But they were anxious about what might happen to them, said Maxim.

“The crimes that we committed; we all will be judged the same. Other than that, I cannot say. It’s impossible to guess … They will judge us,” said Maxim.

Another soldier at a different briefing expressed similar feelings.

“It feels terrible to realize our mistake. It will take years, decades, centuries to repair relations,” he said.

“I wish I could sink into the earth and vanish.”