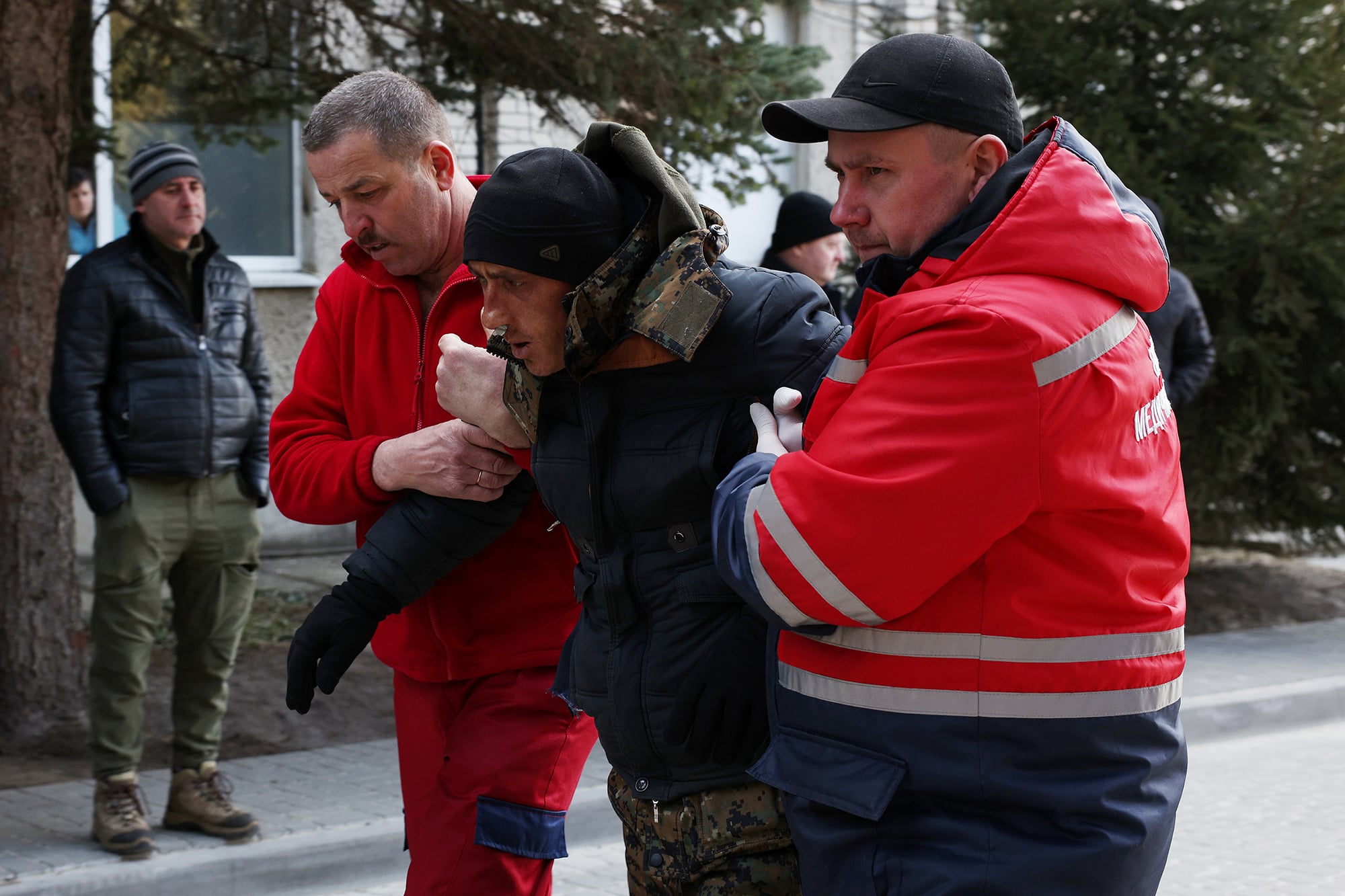 (CNN) — Russia expanded its offensive to western Ukraine on Sunday, firing missiles near the city of Lviv and hitting a large military base close to the Polish border, reportedly killing dozens of people as the war draws closer to NATO’s front line.

The attack came the day after the Kremlin threatened to attack Western weapons shipments to Ukraine.

As the invasion runs into its third week, the northwest city of Lviv has largely been spared from Russia’s relentless bombardment. The picturesque city has instead become ground zero for displaced Ukrainians. Hundreds of thousands of them have flooded into the city in search of relative safety, with many using it as a stopping point before making their way to the Polish border about 43 miles (70 kilometers) away.

But Russia’s war is moving closer to the cultural hub, firing more than 30 missiles at Yavoriv military training ground on Sunday, according to Lviv’s military administration. Located between Lviv and the Polish border, the military base has held joint drills with NATO and Western military personnel, including the United States.

A witness, who was on the base when the strike happened, told CNN of hearing a “sudden clap” from a bomb shelter, adding that the explosion craters were 10 meters deep and there are fears people are under the rubble.

Local authorities say 35 people were killed and 134 injured at the military base, in what Ukraine’s Minister of Defence Oleksii Reznikov described as a “terrorist attack” on peace and security “near the EU-NATO border.”

There were no reports of foreign nationals among the casualties so far, say Ukraine defense officials. The strike came the day after Russia launched a missile attack in the northeastern city of Lutsk, only 70 miles from the Polish border.

United States national security adviser Jake Sullivan told CNN that the strikes on Lviv were a sign that the war was not going to plan. Russian President Vladimir Putin “is frustrated by the fact that his forces are not making the kind of progress that he thought that they would make against major cities, including Kyiv, that he is expanding the number of targets, that he is lashing out, and that he is trying to cause damage in every part of the country,” Sullivan said.

Heavy fighting continued Sunday, with Britain’s Ministry of Defense saying Russia was attempting to “envelop” Ukrainian forces in the east of the country as it advanced from Crimea westwards towards Odessa.

Russian troops continue to focus on the capital Kyiv. Ramzan Kadyrov, the pro-Kremlin leader of Russia’s Chechnya region, reportedly told Russian soldiers outside of Kyiv that the key task is to seize the capital, Russian state news network Russia 24 reported on Sunday.

Amid a growing civilian toll in Ukraine, American journalist Brent Renaud, 50, was killed by Russian forces in Irpin, on the outskirts of Kyiv, according to social media posts by Kyiv region police. Two other journalists were wounded by Russian troops, the police added.

Renaud “paid with his life for attempting to expose the insidiousness, cruelty, and ruthlessness of the aggressor,” an adviser to Ukraine’s interior minister, Anton Gerashchenko, said in a statement on Telegram.

The US State Department confirmed Renaud’s death on Sunday. “We are horrified that journalists and filmmakers—noncombatants—have been killed and injured in Ukraine by Kremlin forces,” department spokesman Ned Price said on Twitter. “This is yet another gruesome example of the Kremlin’s indiscriminate actions.”

Social media footage has emerged of a journalist identified as Juan Arredondo, a filmmaker and visual journalist who is also an adjunct professor at Columbia Journalism School, at Okhmatdyt hospital in Kyiv, in which he describes being shot at by Russian forces while driving through a checkpoint in Irpin on the way to film refugees leaving the city.

The exact circumstances of the attack against the two journalists are yet to be determined.

The dean of Columbia Journalism School, Steve Coll, told CNN, “We don’t have any independent information about his injuries at this time but are working now to learn more and to see if we can help.”

CNN has been unable to confirm which media outlet the American journalists were working for in Ukraine.

Ukrainians continue to protest Russian occupation. The southern city of Kherson, which is occupied by Russian forces, saw the biggest protest since the invasion on Sunday. Hundreds of demonstrators flocked to the streets to protest against suspected Russian plans to turn the southern Ukrainian oblast into a breakaway republic.

Waving Ukrainian flags, the protesters chanted anti-Russian slogans, filled with expletives about Putin, according to videographer Artem Ivanov, who is on the ground in Kherson.

Ihor Kolykhaiev, the mayor of Kherson, said in a video posted on Facebook Sunday that mass protests show “Kherson is Ukraine” and insisted that he retains administrative control of the city.

“Our main weapon is unity,” he added.

In recent days, at least one Kherson regional council official warned that occupation forces were laying the groundwork for the “Kherson People’s Republic.” If true, the move would mirror Moscow’s establishment of two Russian-backed breakaway states in Ukraine’s eastern Donbas region.

Putin recognized the independence of those two territories in the days leading up to Russia’s full-scale invasion of Ukraine as part of his pretext to launch an assault on the country.

Russia’s air offensive on Sunday also bore down on heavily populated areas around the country. Nine people were killed in a Russian bombardment in Mykolaiv Sunday, local officials said. The strategic southern city has resisted Russian occupation and impeded an apparent push towards the major port of Odessa to the west.

Missiles also destroyed an airport in the western Ukrainian city of Ivano-Frankivsk, while the northern city of Chernihiv was struck for the third night in a row, hitting a high-rise building, the regional head, Vyacheslav Chaus, said.

In the eastern region of Luhansk, much of which is now occupied by Russian forces, the head of the regional administration, Serhiy Haidai, said there had been “massive shelling” of several towns, including Kreminna and Rubizhne, which had prevented buses from leaving with civilians.

New round of talks

As the devastation mounts, Ukrainian President Volodymyr Zelensky said the key task Sunday is to get the humanitarian convoy that is traveling towards the besieged city of Mariupol to its destination. Mariupol has been under siege for more than a week. Much of the city is without power and water.

Mariupol’s city administration confirmed Sunday night that the convoy was still stuck some 50 miles to the west.

As the city waits, officials said it had suffered 22 bombing attacks in the last 24 hours and “to date, 2,187 Mariupol residents have died from attacks by Russia.”

Ahead of a new round of negotiations between the two sides this week, Zelensky’s adviser Mykhailo Podoliak said that he believed the talks will “achieve concrete results.”

“Our proposals are on the table. They are very tough. Among them, the withdrawal of troops, the ceasefire,” Podoliak said in a video posted on Twitter.

This comes after Leonid Slutsky, a Russian delegation member for talks with Ukraine, said “significant progress” has been made in negotiations with the Ukrainian delegation since the beginning of talks, Russian state news agency RIA reports.

But talks between Ukraine’s and Russia’s diplomats last week yielded no discernible progress. Supposedly safe routes out of the country have repeatedly been contested. The civilian death toll continues to rise, and by the end of the week, both sides were trading accusations over the use of chemical weapons.

In Russia, authorities continue to violently repress all dissent. Riot police arrested more than 658 people in 35 Russian cities on Sunday, as the number of those detained grows, according to an independent human rights group, OVD-Info.

According to the monitoring group, more than 5,000 people have been arrested across Russia for participating in anti-war protests since last weekend and over 14,633 protesters have been detained in dozens of cities since the start of the invasion on February 24.

Top US and Chinese officials hold high-stakes meeting in Rome