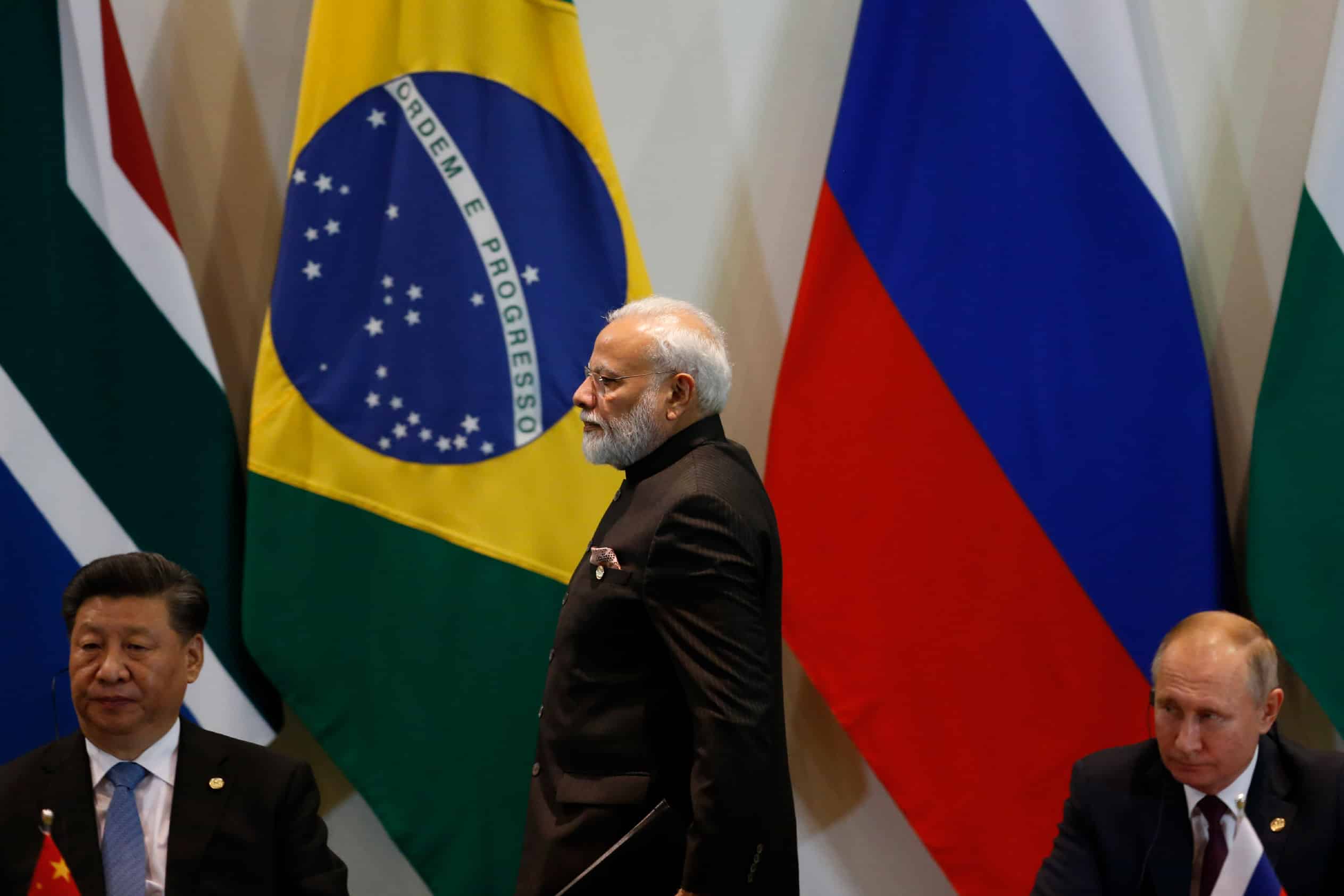 Both China and India have refused to condemn Russia’s brutal invasion outright, and both abstained from voting on United Nations Security Council and General Assembly resolutions demanding Moscow immediately stop its attack on Ukraine.

But with the United States making clear it views countries that don’t condemn Putin’s war as aligned with Russia, the world’s two most populous nations are facing increased international pressure to speak out — or risk being seen as complicit.

That neither country has chosen to do so has illuminated Russia’s outsized influence in Asia, where arms sales and no-strings-attached trade have allowed Moscow to exploit regional fault lines and weaker ties to the West.

In the US and Europe, leaders have framed their response to the invasion as part of a broader ideological battle to uphold democratic freedoms and the rule of law. But for two of Asia’s major powers, those lines are more blurred, with experts suggesting India and China are motivated more by their own self interests.

As Russian troops massed on the border with Ukraine just weeks before Russia invaded, Xi and Putin had never seemed closer.

In a 5,000-word statement as the Beijing Winter Olympics kicked off, the pair said Russia and China’s relationship had “no limits.”

The countries racked up a record-breaking $146 billion in bilateral trade last year and continued a tradition of joint training with a large-scale combined military exercise.

But the real key behind their tightening ties are their mutual tensions with Washington.

Now their so-called limitless relationship is being tested.

Already, questions have been raised over how much Xi knew about Putin’s plans. A Western intelligence report indicated Chinese officials asked senior Russian officials in early February to wait until after the Beijing Olympics had finished before beginning an invasion.

So far, China has refused to condemn the Russian attack or call it an “invasion” and has said it understands Moscow’s “legitimate security concerns.” China’s state media has also parroted Russian talking points on Ukraine. And on Wednesday, Guo Shuqing, chairman of the China Banking and Insurance Regulatory Commission, said China won’t participate in sanctions.

But Beijing also has links to Ukraine, which counts China as its largest trading partner. Ukraine joined Xi’s flagship Belt and Road infrastructure and development initiative in 2017, and last year Ukrainian President Volodymyr Zelensky hailed Ukraine as a potential “bridge to Europe” for China. Freight trains to Europe run through Ukraine, and the country has been a major source of products like corn and barley for China — trade that might not have been disrupted had Russia executed a swift regime change, rather than what looks to be a drawn-out, destructive invasion.

In a call with his Ukrainian counterpart last week, Chinese Foreign Minister Wang Yi said China was “deeply grieved” by the conflict.

And while there’s a chance China could benefit economically from a more reliant and isolated Russia, Beijing will also be worried its enterprises could become entangled in Western sanctions against Russia. The Asian Infrastructure Investment Bank, a development bank backed by Beijing, said Thursday it was suspending all of its activities in Russia as “the war in Ukraine unfolds.”

China will also have to contend with potential fallout in its relationships with the West.

Russia’s invasion of Ukraine has united Western allies like no other issue in recent years and China’s tacit support has not gone unnoticed.

Some analysts have pointed to parallels between Russia’s designs on Ukraine and fears over the future of Taiwan — a self-governing island democracy that China’s Communist Party claims as its own and has not ruled out taking by force.

“Ukraine is a wake-up call for Europe and North America and the other democracies,” said Steve Tsang, director of SOAS China Institute at the University of London.

“You will suddenly have countries in Europe and elsewhere realizing that they have to prepare for eventualities that since the end of the Cold War, over 30 years, we have not thought necessary.”

“In that context, the assertiveness of China and the Chinese declared ambitions over Taiwan will get a lot more countries more worried,” he said.

There’s an elephant in the room when it comes to India’s relationship with Russia: China.

India, the world’s biggest democracy, has looked to counter China’s growing influence in the Asia-Pacific region. One sign of that is India’s role in the Quad — an informal security grouping with the United States, Japan and Australia that’s recently become more active.

And it has a defense relationship with Russia — estimates range upwards of 50% for how much of India’s military equipment came from Russia. That equipment is vital given India’s ongoing tensions at the border with China, which could escalate again. India also has a fraught relationship with its neighbor Pakistan, which flared into crisis at their disputed Kashmir border region in 2019.

Meanwhile, India inked a $5 billion weapons deal with Russia in 2018 for an air defense missile system, though well aware of the sanctions America could impose through the US side’s Counter America’s Adversaries Through Sanctions Act (CAATSA).

India isn’t looking at the situation in Ukraine in terms of their relationship with that country — it’s thinking about the dangers in its own backyard, Happymon Jacob, an associate professor of diplomacy and disarmament at the Jawaharlal Nehru University in New Delhi, said.

“This isn’t about going against the West or supporting Russia,” Jacob said. “(India’s government) hasn’t explicitly supported Russia, but they have to take a more careful, nuanced approach.”

So far, India has tried to play both sides — Modi has spoken with both Zelensky and Putin, and has pledged humanitarian aid for Ukraine. Modi hasn’t explicitly condemned Russia’s attacks — he’s called for “an immediate cessation of violence” and “concerted efforts from all sides” to negotiate, according to a read-out of his February 24 call with Putin.

Russia and India have a long history of friendly relations, which stretch back to the Soviet era when the USSR helped India win its 1971 war with Pakistan. There’s also the relationship between Putin and Modi, who was one of only two world leaders Putin traveled to see last year, for a visit to New Delhi in December.

“India needs Russia to stand up to China,” said Harsh V. Pant, a professor in international relations at King’s College London and head of the Strategic Studies Program at the Observer Research Foundation in New Delhi. “It will have to balance its historic ties with Russia with its burgeoning ties with the West.”

The US’ defense trade with India has risen from nearly zero in 2008 to more than $20 billion in 2020. And as Russia’s war rages on, Putin may have less in the way of defense support to offer countries like India “what with the incredible rate of attrition in Ukraine,” said Ian Hall, a professor of international relations at Griffith University.

And there’s domestic pressure too — after an Indian student was killed during Russia’s shelling of Kharkiv last week while buying groceries, there’s been growing calls within India to help evacuate the hundreds of other Indian students stuck in the northeastern city of Sumy, which has come under heavy bombardment in recent days.

Even before Russia invaded Ukraine, this tangle of relationships was sometimes fraught. Now with widespread condemnation against its actions, Russia is likely to be considered a pariah state in the West. And that could make its relationships with countries like China and India even more important.

“In (Putin’s) first stint as President, he put a lot of emphasis in rekindling old Soviet ties with Asian partners,” said Hervé Lemahieu, director of research at the Australia-based think tank the Lowy Institute. “He does have ballast in Asia … and, as we’ve seen, he has more than just China to rely on.”

Both China and India are maintaining the friendship out of self-interest — but for very different reasons.

China has a “clear interest” in making sure people like Putin stay in power, says SOAS’s Tsang.

“They share two primary strategic interests: one is to take the American global leadership down a notch or two. The second is to make the world safe for authoritarianism,” Tsang said.

But Beijing’s support is conditional — if the Russians are unsuccessful to the point that they can’t aid the countries’ shared aims, China could recalibrate its support, he said.

Elsewhere in Asia, US allies South Korea and Japan have come out in condemnation of Russia. Singapore has also levied sanctions against Russia. And while the Association of Southeast Asian Nations (ASEAN) issued a statement last week that did not condemn or refer to Russia’s actions as an invasion, eight of the 10 members voted in favor of the UN General Assembly resolution calling on Russia to immediately cease its use of force in Ukraine. Only Laos and Vietnam abstained.

As for democratic India, security and development concerns may come first.

“In Asia, the fundamental challenge for most is China’s rising power, China’s huge force,” Manoj Kewalramani, chair of the Indo-Pacific Research Program at the Takshashila Institution in Bangalore, said.

“This binary of democracy and autocrats is problematic — the world is much more complicated.”

Despite Russia’s restrictions on the press, ‘time is on the side of liberty,’ Radio Free Europe CEO says