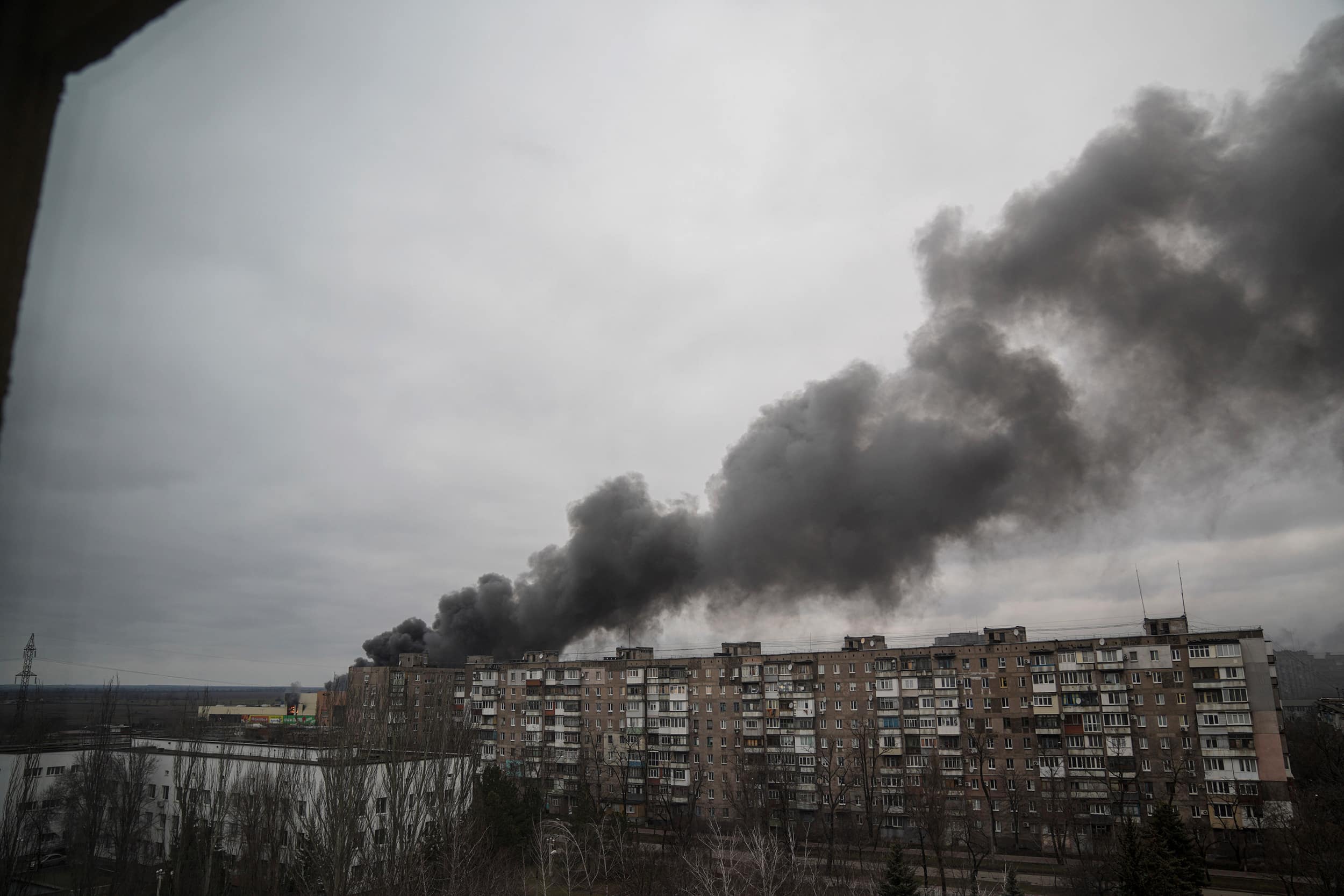 (CNN) — Concern was mounting Sunday for the plight of civilians trapped in the besieged southeastern Ukrainian cities of Mariupol and Volnovakha, as well as in the capital, Kyiv, after three people were reported killed Sunday in a blast at an evacuation crossing point.

Two mortar or artillery shells hit the checkpoint in the suburb of Irpin, northwest of Kyiv, Ukrainian authorities said, and two children were among those killed. Social media video showed extensive destruction.

International media filming at the checkpoint reported that a shell landed as a stream of civilians was coming through.

In the country’s southeast, hopes that a second attempt to open up safe evacuation routes for civilians in Mariupol and Volnovakha might succeed, after a first effort failed on Saturday, were dashed within hours.

The governor of the Donetsk region, Pavlo Kyrylenko said on Facebook Sunday that the planned “evacuation convoy with local residents was never able to leave Mariupol today: the Russians began to regroup their forces and heavy shelling of the city. It is extremely dangerous to evacuate people in such conditions.”

Kyrylenko added that a convoy carrying humanitarian aid from the central city of Zaporizhzhya, three hours from Mariupol, “has not yet reached its destination and is currently on its way.”

“Today, our team began opening up the evacuation route from Mariupol before hostilities resumed. We remain in Mariupol and are ready to help facilitate further attempts — if the parties reach an agreement, which is for them alone to implement and respect,” the ICRC said on Twitter.

“People in Mariupol and in other places across #Ukraine are living in desperate situations. They must be protected at all times. They are not a target. People urgently need water, food, shelter. The basics of life. We need safety guarantees to be able to bring them aid.”

Earlier Sunday, heavy shelling was reported to the west and northwest of Kyiv. The impact of explosions was heard by CNN teams in Kyiv and in rural areas to the southwest.

“They (Russian troops) captured Hostomel and Bucha yesterday (Saturday). The Russians entered there,” said Oleksiy Arestovych, an adviser in the Ukrainian President’s Office, referring to two suburbs northwest of Kyiv. “They have injured many children and do not allow to evacuate them, despite numerous appeals at the highest state level to provide a ‘green corridor’ from Bucha and Irpin. There are many children in the basements.”

Arestovych described the situation as a “catastrophe,” adding that discussions were going on “at the highest level with international humanitarian institutions, through mediators with the Russians” in order to find a way out for those who are trapped.

Several children have died, according to the Ministry of Health of Ukraine.

People in Mariupol are trapped without power and water and unable to recover their dead, its mayor said Saturday, as he accused Russia of trying to “choke” the city by shutting off agreed evacuation routes.

Separately, Ukrainian President Volodymyr Zelensky warned Sunday that Russia was preparing to bomb the Black Sea port city of Odessa in southern Ukraine and said the airport in Vynnytsia, in the west of the country, had been destroyed by a rocket strike.

In an address broadcast on Facebook, Zelensky said: “Russian people always used to come to Odessa and they only knew warmth and generosity and what’s now? Artillery, bombs against Odessa. This will be a war crime. This will be (a) historic crime.”

In a separate message, Zelensky again appealed for a no-fly zone to be imposed over Ukraine, following the destruction of Vynnytsia’s airport.

“They continue to ruin our infrastructure our life, which we have built, and our parents, and grandparents, many generations of Ukrainians. We repeat every day — close the skies over Ukraine,” he added.

Russia agreed to a ceasefire on Saturday to allow civilians to safely leave Mariupol and Volnovakha, but the evacuations were then stopped, with Ukrainian authorities accusing Russia of violating the agreement by resuming its attacks, leaving thousands of civilians trapped in what people on the ground describe as increasingly dire conditions.

Mariupol Mayor Vadym Boichenko said on Saturday the city was without power, heat, water or mobile networks, and some buses that were going to be used to evacuate civilians had been destroyed in the shelling.

“(The Russian military) is working to besiege the city and set up a blockade. They want to cut us off from the humanitarian corridor, shutting down the delivery of essential goods, medical supplies, even baby food,” he said in an interview on a YouTube channel Saturday. “Their goal is to choke the city and place it under an unbearable stress.”

A resident of a village near Volnovakha, whose husband has been trying to evacuate people from the city in recent days, gave CNN a written account of the situation there, saying: “There is almost nothing left in the city, something comes in every minute from all sides, it is not clear what … and it is not clear from where it comes. Scary, crazy!”

Russia’s Defense Ministry said in a statement carried by TASS that offensive operations resumed Saturday evening, local time, claiming the “population of these cities is being held by nationalist formations as human shields.”

The United Kingdom’s Defense Ministry said Russia had likely accused Ukraine of breaking the agreement to “shift responsibility for current and future civilian casualties in the city.”

In Mariupol — a city with a population of nearly 400,000 — doctors are living and sleeping at hospitals as they work to save lives, Boichenko said.

“This is the sixth straight day of airstrikes and we are not able to get out to recover the dead,” he said Saturday.

A Doctors Without Borders (MSF) staff member said they collected snow and rain on Friday for water. Multiple grocery stores were reportedly destroyed by missiles, and pharmacies are out of medicine, the staffer said.

“Civilians must not be trapped in a war zone,” Jamet said Saturday. “People seeking safety must be able to do so, without fear of violence.”

As the Russian invasion continues, Zelensky has reiterated his pleas for US and NATO assistance in establishing a no-fly zone over Ukraine — a move which could prevent Russian forces from carrying out airstrikes against the country.

But there are fears such a move could be seen as an escalation, with Russian President Vladimir Putin warning on Saturday he would consider countries imposing a no-fly zone over Ukraine as “participants in a military conflict.”

Zelensky has repeatedly asked NATO and Western officials to impose a no-fly zone over Ukraine, but both say they oppose such a move.

US Secretary of State Antony Blinken said Friday that establishing such a zone could lead to a “full-fledged war in Europe,” but added Washington would continue to work with its allies to provide Ukrainians with the means to defend themselves from Russian aggression.

In an impassioned call to US lawmakers Saturday, Zelensky also encouraged Eastern European nations to provide Ukraine with fighter jets, stressing they were needed to defend against Russian aggression.

On the call, Zelensky said if the West won’t impose a no-fly zone they should give Ukraine planes.

A White House spokesperson confirmed the US is working with Poland on the possibility of Warsaw providing fighter jets to Ukraine. Some Biden administration officials privately fear that this move could be viewed by the Russians as an escalation, US officials say.

Putin claimed Saturday that Russia had almost completed the destruction of Ukrainian air defense systems, and added that Western sanctions were the “equivalent of a declaration of war.”

In the southern city of Kherson, Ukrainians took to the streets to protest Saturday — despite being under Russian occupation.

On Wednesday, the city’s mayor said the Ukrainian military was no longer in the city and that its inhabitants must now carry out the instructions of “armed people who came to the city’s administration” — indicating that Kherson had fallen under Russian control.

A Kherson resident said Friday people couldn’t go outside, Ukrainian TV had been taken off air and men were being seized and taken away.

But on Saturday, residents took to the Russian-occupied streets, waving flags and chanting, video shows.

Zelensky praised the Ukrainian resistance in Kherson, saying protesting when your city is occupied is a “special kind of heroism.”

“When you don’t have a firearm but they respond with gunshots and you don’t run … this is the reason why occupation is temporary,” he said in a video address posted to his official Facebook page on Saturday.