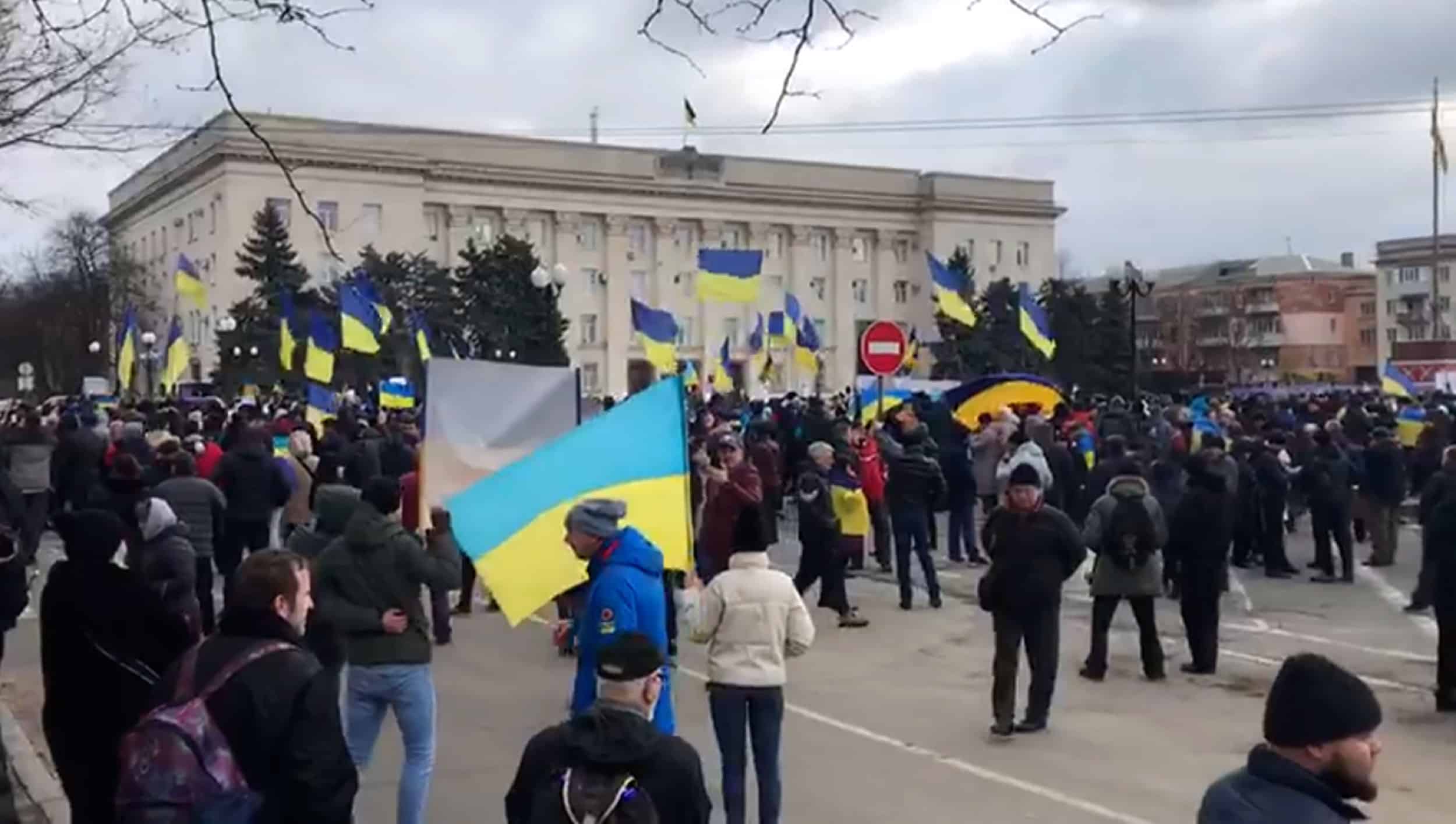 (CNN) — While the Ukrainian military’s resistance against Russia’s invasion has been well-documented, the last few days have seen growing popular defiance of Russian forces. In the south of Ukraine, especially, there have been multiple protests in areas where Russian troops have arrived.

At least several hundred people gathered in the center of Kherson on Saturday to protest the Russian occupation of the Black Sea port.

One video of the demonstrations showed people walking into Kherson’s main square despite the occasional volley of gunfire. Where that gunfire came from is unclear, but a small detachment of Russian soldiers is seen guarding the Regional Council building.

The protesters chanted “Ukrainia,” and the largest cheer went up when a young man waving Ukraine’s blue-and-yellow flag scrambled onto a Russian troop carrier.

One man who attended the protests managed to send a sequence of videos to CNN, saying in broken English: “People want to show that Kherson is Ukraine, and all brave people go into this meeting, not afraid of Russian military.”

There was a further demonstration in Kherson on Sunday. Videos from this event suggest it was smaller but no less determined. An elderly woman looked steadily into the camera in one video and said quietly: “Save our country! Let them all die, together with Putin.”

The protests in Kherson this weekend were the largest and latest in a growing tide of confrontations in the few Ukrainian towns and cities of any size that Russian forces have taken.

They may be an ominous sign for Russian commanders already struggling to break down Ukrainian military resistance. And, despite the risk, this civil disobedience is being urged on from above.

On Saturday, Ukrainian President Volodymyr Zelensky said in a Facebook message: “Everyone who can defend their city must continue to fight. Must. Because if everyone leaves, then whose city will it be?”

And, on Sunday, hundreds of people heeded Zelensky’s call and took part in marches throughout the Kherson region, which is close to Russian-controlled Crimea.

In the city of Nova Kakhovka, a crowd cheered as an elderly woman brandished a broom and dustpan as a welcome to Russian troops. Two men scrambled up a plinth to raise the Ukrainian flag outside the city hall.

Later, video emerged of smoke rising from among the crowd amid the sound of gunfire. The Ukrainian news agency Interfax said five people had been injured after Russian forces opened fire — apparently above the protestors’ heads — and used stun grenades.

It seemed like almost every town in Kherson was out on Sunday. In Novooleksiika, hundreds sang the national anthem and shouted “Ukraine is above all” as they walked down a rural road.

And in Kalanchak, which lies closer to Crimea, hundreds of people sang the national anthem and shouted “Ukraine is above all” as they walked down a rural road — with multiple generations of locals bound together in national solidarity.

Since the middle of last week there have been protests against Russia, often involving just a few dozen people, from Berdyansk on Ukraine’s south coast to Konotop, hundreds of miles north between Kyiv and Kharkiv.

When the Russian military arrived in Konotop, a small crowd swarmed a Russian military vehicle, yelling abuse. One climbed onto its hood and then tumbled off as it sped away. In Berdyansk, a crowd sang the Ukrainian national anthem outside the city hall, which was occupied by Russian troops last week. Bolder civilians confronted soldiers in a truck, who seemed bewildered.

Individual acts of defiance are going viral in a country where the internet and mobile communications remain largely intact, much to the surprise of most people. The footage spread rapidly through Telegram and Facebook — short, uneven clips where the raw courage of protesters punches through.

These are all scattered examples, and they don’t amount to organized resistance. But they do demonstrate genuine defiance and opposition to the new order that Russian forces are trying to impose as they gradually take more territory.

The quandary for the occupying force is finding local officials willing to work under their direction to maintain services in towns and cities where food and medical supplies are running short. The Russians seem poorly prepared to install local administrations.

In most cases so far, Russian troops have kept a low profile in the face of civilian protests. They have stood their ground but not reacted. But not always. In a town in the eastern region of Luhansk, which is largely Russian-speaking, residents took to the streets of Novopskov on Friday.

“Get out of here! War and death are following you,” they chanted.

They came back for more on Saturday, when Russian troops shot one man in the leg and fired volleys into the air to disperse a crowd approaching their position.

What’s unclear is whether the Russians can both control the cities they are beginning to occupy and try to drive forward across this vast country. Russian forces are already experiencing supply issues, according to US officials. Crushing Ukrainian military resistance as well as subduing an emboldened population would be a tall order.