Home Breaking News ‘The whole world right now needs to unite’: Rallies are being held across the US in support of Ukraine 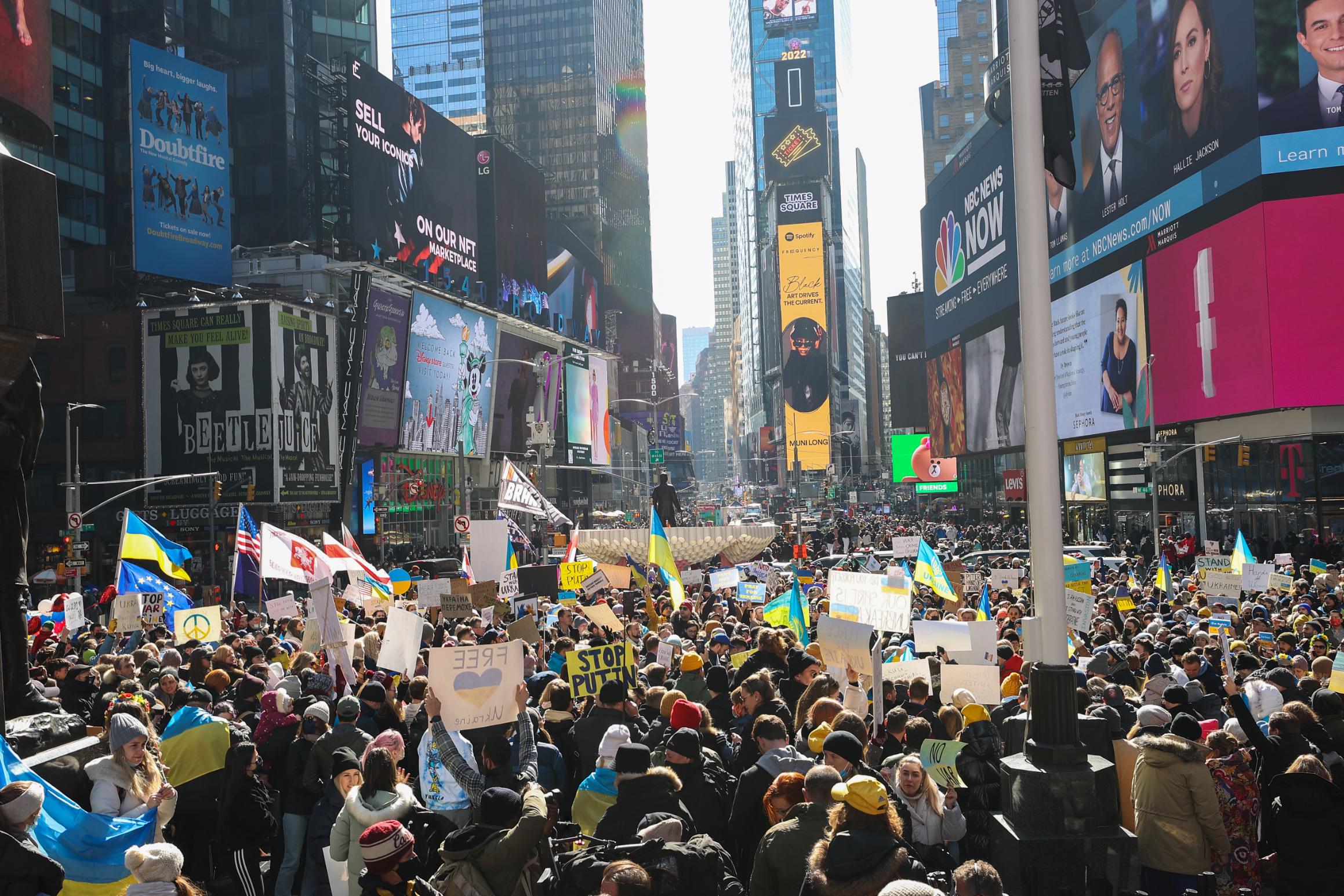 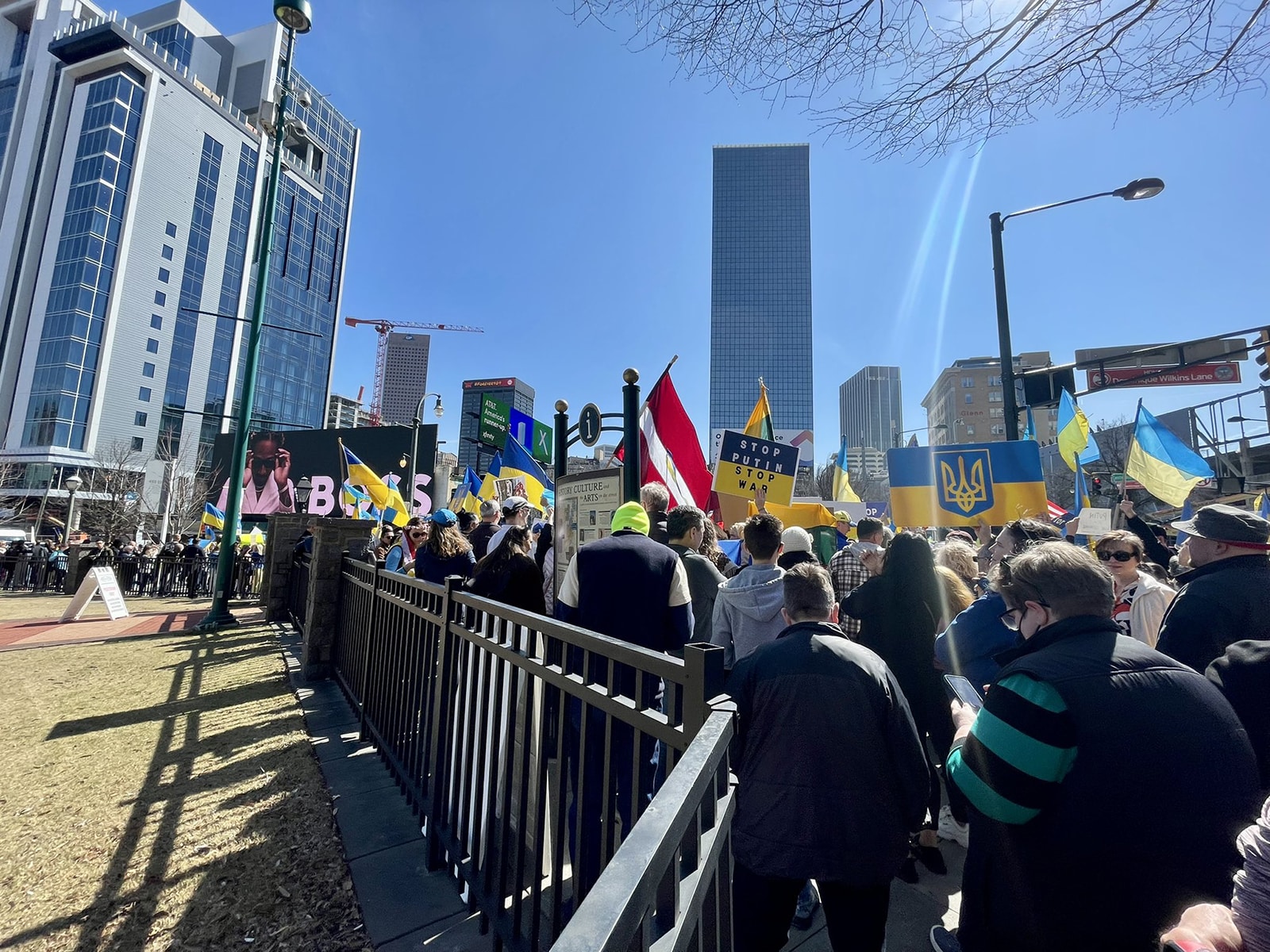 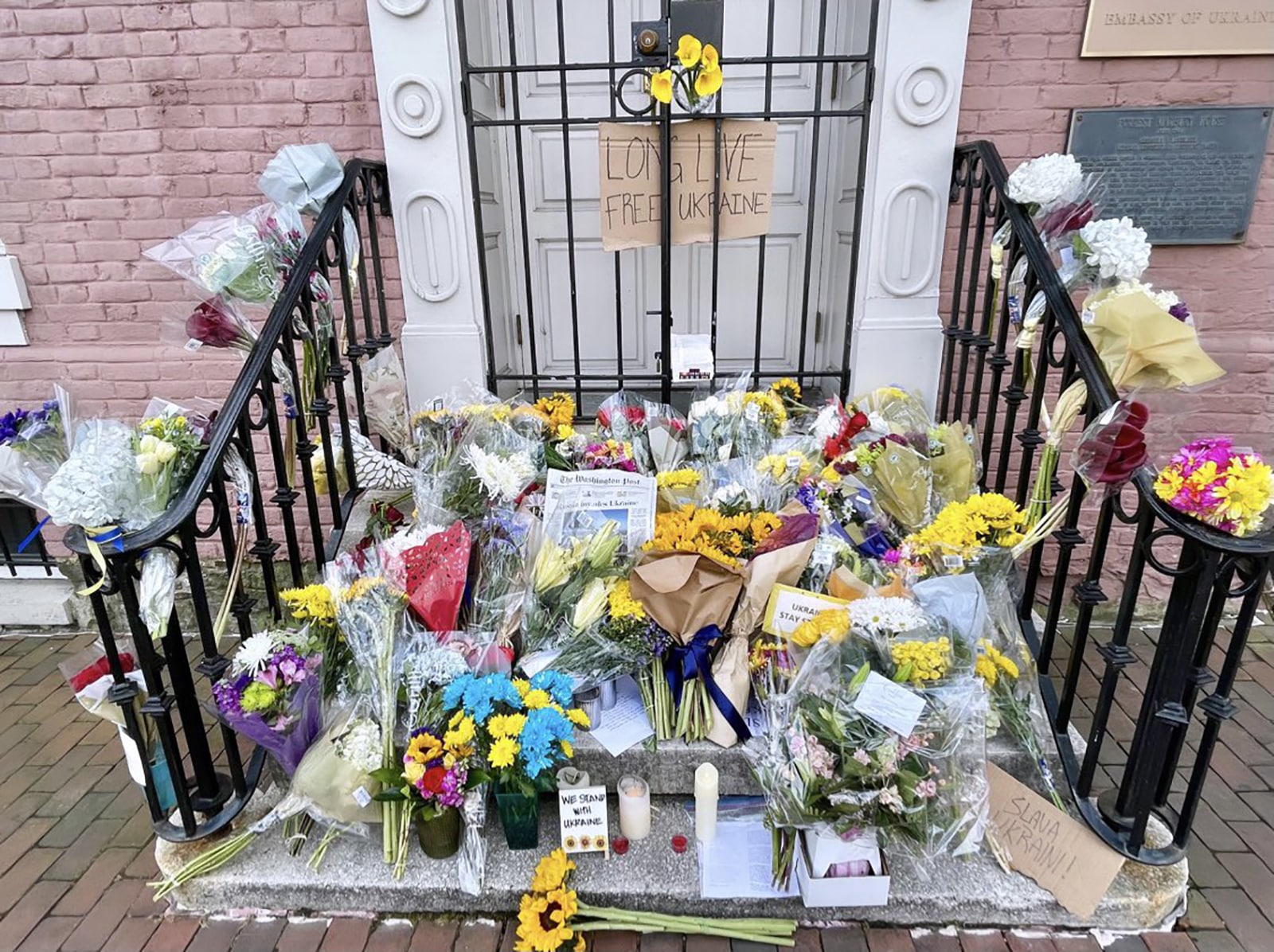 (CNN) — Cities across the United States have seen rallies in support of Ukraine this weekend as the invasion by Russian forces continues.

Crowds gathered on Saturday in cities including Atlanta, Washington, DC, and New York — where Olga Ladygina told CNN at a rally in Times Square that she hasn’t slept for the last three nights. Her friends in Ukraine have stayed up, too, Ladygina, who is from Kyiv, told CNN. But they’re making homemade bombs to try to stop Russian tanks.

Ladygina has been up crying, watching the news and trying to call her loved ones who remain in Ukraine. It’s a stark contrast to what she sees in New York, she said. On Saturday, she saw people sitting and eating in restaurants who “don’t think that the war can come to their houses,” she told CNN.

But peace, she said, is fragile.

“I think that the whole world right now needs to unite,” Ladygina said, adding: “Now is the time to say no and stop one person who keeps in fear the whole world.”

Saturday’s demonstrations came on the third day of the Russian assault, which began early Thursday. The capital city of Kyiv remained under Ukranian control Saturday after a night of fierce fighting. Ukraine has remained defiant, and President Volodymyr Zelensky echoed the resolve of his people, some of whom have taken up arms, in a video message Saturday.

“Each Ukrainian should keep one thing in mind: if you can stop and destroy the occupiers — do it,” Zelensky said. “Everyone who can come back to Ukraine — come back to defend Ukraine.”

A similar resolve was seen among Ukrainian-Americans and their allies in the US as they demanded more action to support Ukraine and its outgunned military. Western nations have imposed sweeping sanctions on Russia in response to the invasion, and the US, UK and EU on Friday sanctioned President Vladimir Putin himself.

But some Ukrainian supporters, like Merrick Brown, whose great grandparents came to the United States from Ukraine, think more needs to be done.

“I believe the US and NATO should provide military assistance to Ukraine,” Brown, who also attended the Times Square rally, told CNN. He described the demonstration as peaceful and “more pro-Ukraine than anti-Russia.”

In downtown Atlanta, dozens of people gathered for a “Stand with Ukraine” rally. Some attendees wore blue and yellow, the colors of the Ukrainian flag, while others carried signs that read, “Pray for Ukraine” and “Ukranians Unite!” as they sang the Ukrainian national anthem.

Ukrainian Anton Kilpa was among them. His parents live in Kyiv, Kilpa told told CNN affiliate WGCL. He learned the invasion had begun when a Canadian-Ukrainian friend called him earlier this week, just before bed, and told him to phone his parents immediately.

Joshua Hill, another attendee in Atlanta, doesn’t have a personal connection to Ukraine, but he told CNN via Twitter he joined because “Ukraine needs the support of the world.”

“Our leaders aren’t doing enough,” Hill said. “I’m here to show support for more action from the US government, NATO and all of Ukraine’s allies.”

‘I just wanted to show my support and solidarity’

In Washington, DC, another crowd demonstrated in front of the White House.

Many attendees hoisted Ukrainian flags or had them draped around their shoulders as they chanted, “Stop Putin now.”

Other signs called for more robust consequences, like expelling Russia from the Society for Worldwide Interbank Financial Telecommunication (SWIFT), a high security network that connect thousands of financial institutions around the world. On Saturday evening, the White House and the EU announced the expulsion of select Russian banks from SWIFT.

One demonstrator, JP Wheeler, told CNN he was “just a concerned citizen” with no personal ties to Ukraine. “No family or friends, just a human connection and a desire to support the Ukrainians and (their) struggle,” Wheeler said.

A couple miles away from the rally outside the White House, Eleanor Shiori Hughes, a graduate student at Georgetown University, left flowers on the steps of the Ukrainian embassy, where a sign read “Long Live Free Ukraine.”

She, too, had no connection to Ukraine.

“I just wanted to show my support and solidarity for the Ukrainian people,” Hughes said.

That solidarity was shown in ways other than protest, too: Across the country, buildings lit up blue and yellow to signal support for Ukrainians. Among them were state capitols in New York and Colorado, along with Atlanta City Hall.

“We know that freedom, democracy, and independence are a light unto the world,” Colorado Gov. Jared Polis said in a statement.

“We are proud to cast the colors of the Ukrainian flag across our own State Capitol as we continue to support and pray for the brave people of Ukraine during this dark time,” he said.

‘The world needs to act’

Similar demonstrations were held in a number of cities on Friday.

In Nashville, CNN affiliate WTVF reported several dozen protesters had gathered on the steps of Tennessee’s state capitol that morning.

“Sanctions are not enough,” one sign read, per footage from WTVF. Another: “The world needs to act now.”

Attendee Alisa Kaiser told the station that most of the demonstrators probably had family in Ukraine. “They’re happy we’re not there, because we’re safe here,” she said. “But all you want is to be there with them to support.”

She added: “We need to make sure that this does not go further than it already has … It’s gone too far.”

Students at Indiana University in Bloomington also staged a rally Friday, per affiliate WRTV. Iryna Voloshaynra, an international student whose parents and sister remain in Ukraine, was one of the participants. She told the station she hadn’t slept much because she was afraid of waking up to bad news.

More than a thousand demonstrators marched down Chicago’s Michigan Avenue Friday evening as Kyiv resisted the advance of Russian forces, according to a report by affiliate WLS. The city boasts a large Ukrainian community.

Anatoliy Mushak told the station the situation in Ukraine is “unpredictable.”

“They are under siege right now,” he said.

US will not use American troops to create no-fly zone in Ukraine, says UN ambassador