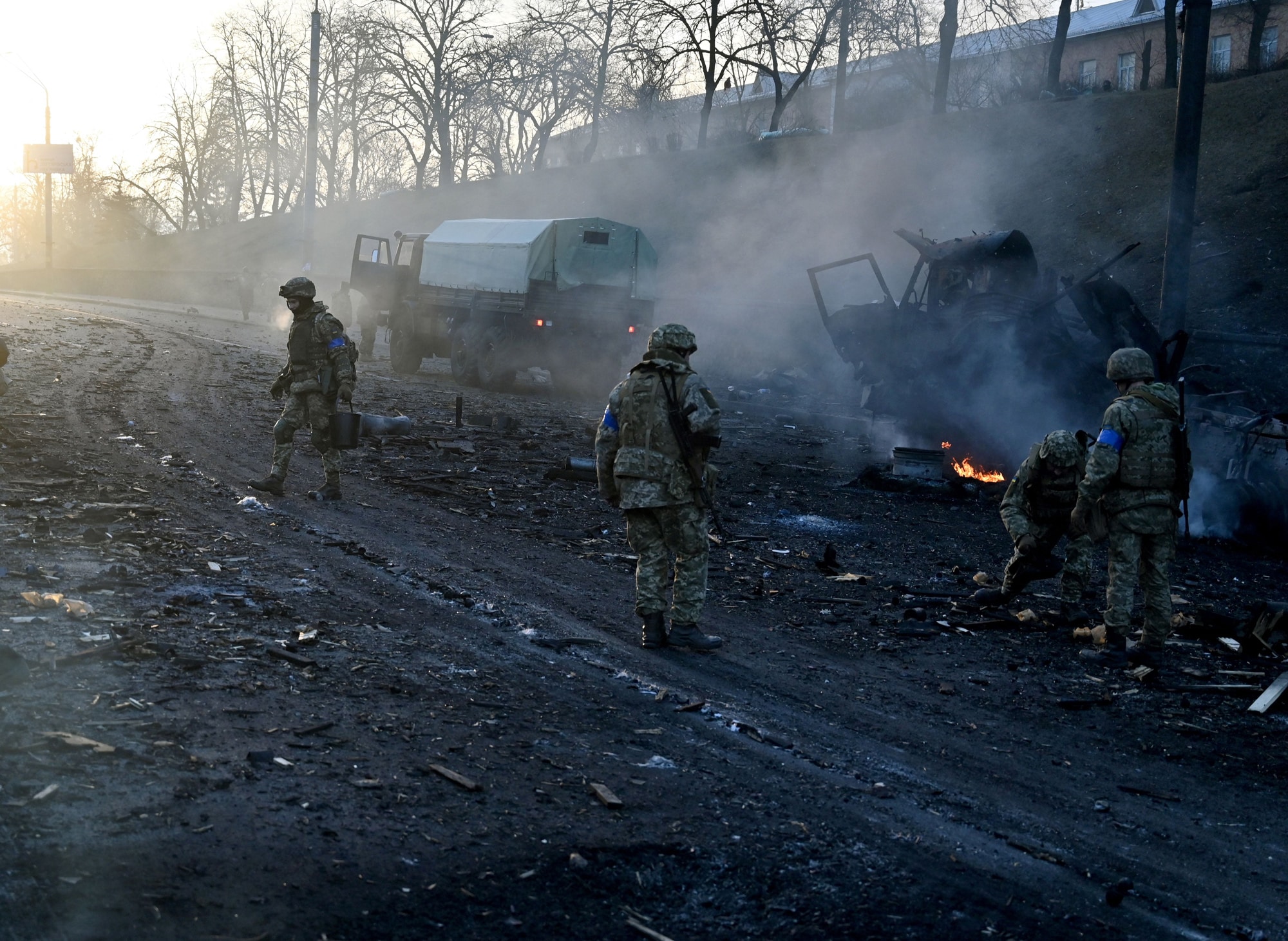 (CNN) — Russian President Vladimir Putin ordered his country’s deterrence forces — which include nuclear arms — onto their highest state of alert on Sunday, as Ukrainian forces engaged in fierce fighting with Russian troops in multiple cities across Ukraine.

The Russian President’s move comes in the face of universal condemnation and increased sanctions from Western powers over Moscow’s unprovoked assault on Ukraine, now in its fourth day.

“Top officials in leading NATO countries have allowed themselves to make aggressive comments about our country, therefore I hereby order the Minister of Defense and the chief of the General Staff to place the Russian Army Deterrence Force on combat alert,” Putin said in a televised meeting with top Russian defense officials.

Zelensky had earlier said he would be willing to hold talks with Russia but not in Belarus, pointing out that Russian military actions are being launched from the country.

Ukraine has said its air force shot down a cruise missile launched at Kyiv on Sunday from Belarus. Belarus is an ally of Russia and has played an important role in Russia’s invasion of Ukraine.

“Aleksander Lukashenko has taken responsibility for ensuring that all planes, helicopters and missiles stationed on the Belarusian territory will remain on the ground during the Ukrainian delegation’s travel, meeting and return.”

As the fighting continues, hundreds of thousands of Ukrainians have fled their homes and dozens of civilians have been killed, according to UN figures.

Ukrainian Foreign Minister Dmytro Kuleba told a briefing that Putin’s order to put Russian deterrent forces on alert was a “direct threat to us” and an effort to raise pressure on the Ukrainian delegation at Monday’s scheduled talks.

Kuleba indicated that Ukrainian officials are willing to “listen to what Russia has to say” but will not give in to pressure. “We will tell them what we think of this,” he said. “And what we are ready to discuss is how to stop the war and the occupation of our territories. Full stop.”

Kuleba said that, according to Ukrainian intelligence, even people within Putin’s inner circle do not agree with Russia’s invasion of Ukraine, “because they understand the detrimental, the damaging, the devastating consequences this conflict will have for Russia itself.”

Fighting in Kharkiv, missiles in Kyiv

Earlier Sunday, residents of the Ukrainian capital, Kyiv, awoke to find the city still firmly under Ukrainian control, despite two massive explosions some 30 kilometers, or about 18 miles, south of the city lighting up the sky overnight.

And fighting broke out on the streets of Kharkiv, Ukraine’s second largest city, after Russian forces entered the city, Oleh Synehubov, the head of the Kharkiv Regional State Administration, said Sunday. “Do not leave your shelters!” he posted on Facebook, warning civilians not to go out on the streets.

“Intensive exchanges of rocket artillery overnight have been followed by heavy fighting between Russian and Ukrainian forces in Kharkiv,” an assessment by the UK’s Ministry of Defence said.

Ukrainian forces had managed to deter the Russians from entering the northeastern city — home to about 1.4 million people — for the past three days. The city, which sits less than 20 miles south of the Russian border, was approached by Russian forces shortly after the invasion began.

But despite being far better equipped, Russia has failed to take control of key cities, as ordinary Ukrainians and reservists join efforts to defend their homes and families.

Others are fleeing the conflict. The United Nations estimates as many as 368,000 Ukrainians are now refugees.

The UN Office for the Coordination of Humanitarian Affairs said late Saturday that the United Nations “reports at least 240 civilian casualties, including at least 64 people killed” in the fighting in Ukraine. Damage to civilian infrastructure has deprived hundreds of thousands of people of access to electricity or water, the statement added.

In a video message Sunday, Zelensky accused Russian troops of targeting civilians, including children, and called for an international investigation into the conflict.

The Russian Ministry of Defense has previously said it is targeting only military infrastructure, saying in a statement: “The Armed Forces of the Russian Federation do not strike cities and towns, they take all measures to save the lives of civilians.”

But Zelensky rejected this, saying: “They lied when they said they would not target civilian population. Since the first hours of the invasion, Russian troops have been hitting civilian infrastructure.”

Ukraine is “documenting their crimes,” he said, adding: “This is terror.”

“The Russian government doesn’t understand they are not fighting only with the government, in fact they are fighting against the entire Ukrainian people,” he added.

Russian troops are facing a determined and highly-motivated Ukrainian resistance, resulting in significantly slower progress than Kremlin military planners had first anticipated, according to an assessment issued by Britain’s Ministry of Defence late Saturday. After encountering strong resistance in Chernihiv, Russian forces were now bypassing the area to prioritize “the encirclement and isolation of Kyiv,” another British assessment said Sunday.

Ukrainian Maj. Gen. Borys Kremenetsky told reporters Saturday that Ukraine had captured around 200 Russian soldiers, some of whom were just 19 years old. They were not trained at all and were badly equipped, he said. CNN has not been able to independently verify this.

Russia has yet to establish air supremacy over Ukraine, one US official said, as the Ukrainian Air Force and air defense systems fight for control of the airspace. Without uncontested control of the skies, it becomes more difficult for an army on the move to see and strike targets from the air.

So far these challenges have prevented the quick overthrow of major Ukrainian cities, including the capital, which US officials were concerned could play out in a matter of days. The city of Kharkiv near Ukraine’s border with Russia also has not fallen to invading forces — despite officials worrying that could happen on the first night of an invasion.

A NATO official agreed that Russian forces were having problems.

“They lack diesel, they are proceeding way too slow and morale is obviously an issue,” said the official.

Asked whether Russians are likely to intensify their efforts, the official said they have no choice. “They are way behind schedule,” the official said. “This is getting out of hand for them, every additional day is very painful.”

But the Russians on Sunday countered reports of its military stalling, claiming the cities of Kherson and Berdyansk “were completely blocked” by Russian forces, and the city of Henichesk and the Chornobayivka airfield near Kherson, also known as Chernobayevka, had both been brought under control.

CNN could not immediately verify those claims.

Ukrainian Defense Minister Oleksiy Reznikov said on Sunday that checkpoints would be set up across the country to detect Russian troops and make their movements more difficult.

Concerns are now growing that Russia may look to deploy indiscriminate battlefield weaponry in civilian areas in an attempt to decisively crush Ukrainian forces.

Thermobaric weapons have been used in Chechnya, with horrifying consequences, according to Human Rights Watch, and their use has been condemned by number of non-governmental organizations.

There is no evidence that thermobaric weapons have been used in the conflict in Ukraine.

Although Russia has claimed it is not targeting civilian infrastructure, an increasing body of evidence on the ground suggests otherwise.

Kyiv Mayor Vitaly Klitschko said Sunday that nine civilians, including one child, had been killed in Kyiv since the invasion began, as well as 18 military and territorial defense personnel. There are currently no Russian troops in the capital, he added. The mayor extended a strict curfew across the city until Monday morning.

According to a local hospital, a six-year-old boy died in heavy gunfire in a western district of Kyiv on Saturday evening.

A woman was killed after a nine-story residential building in the eastern city of Kharkiv was hit by “enemy artillery” on Saturday night, according to Ukraine’s State Emergency Service.

Polish officials said Sunday that 187,000 people had entered Poland from Ukraine since the invasion began on Thursday.

As the battle continues, a defiant Zelensky has released a series of videos from the streets of Kyiv urging citizens to defend their country.

Officials armed reservists with 18,000 guns and ammunition in Kyiv alone, and Ukrainian TV has broadcast instructions for making Molotov cocktails. Ukrainian males ages 18 to 60 are banned from leaving the country.

In a statement Sunday, Zelensky called on citizens of the world also to join the fight against the “Russian war criminals.”

“This is not just Russia’s invasion of Ukraine. This is the beginning of a war against Europe, against European structures, against democracy, against basic human rights, against a global order of law, rules and peaceful coexistence,” he said.

Western powers have imposed several rounds of sanctions against Russia since Thursday, with more under consideration. On Saturday, the United States, European Union, United Kingdom and Canada said they would expel some Russian banks from SWIFT, a global financial messaging service, and “paralyze” the assets of Russia’s central bank.

German Chancellor Olaf Scholz vowed Sunday that “very soon the Russian leadership will feel what a high price they will have to pay” for the invasion of Ukraine, as he announced he would raise German military funding during a special session with lawmakers.

Germany, France and Italy said they would close their airspace to Russian aircraft from Sunday, following the lead of several other European nations.

At home, the Kremlin appears to be in damage control, attempting to limit information about the difficulties its forces are facing in Ukraine.

Social media platform Twitter said Saturday it is being restricted inside Russia and is working to address the issue.

Russia’s media regulator told 10 news outlets that it would restrict access to their publications unless they stopped spreading “false information” — including the shelling of Ukrainian cities and the death of civilians caused by the Russian armed forces.

Nonetheless, Russians continued to turn out for anti-war protests over the weekend. Russian authorities have detained a total of 4,862 people for participating in unsanctioned anti-war protests across the country since the invasion of Ukraine was ordered independent monitoring site OVD-Info said on Sunday.

‘The whole world right now needs to unite’: Rallies are being held across the US in support of Ukraine

ArmorSource to Provide U.S. Army With Next Generation Crewman Helmets