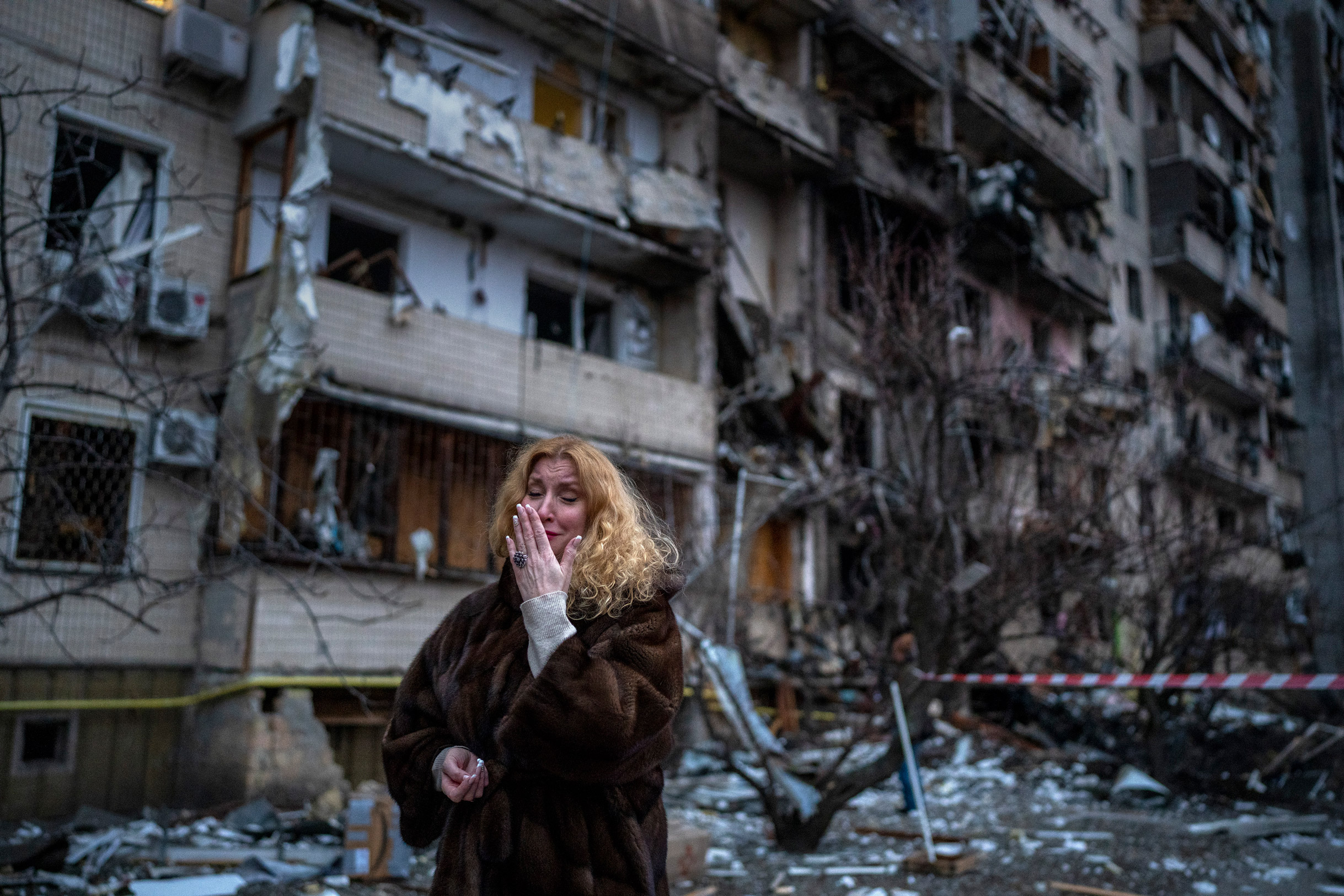 (CNN) — A palpable sense of dread hovered over Kyiv Friday as the sound of air raid sirens pierced the otherwise quiet city at regular intervals, leaving people guessing at just how close Russian forces were.

It was another terrifying wakening for the residents of Kyiv as several loud bangs were heard at daybreak and later throughout the morning.

Heavy smoke was seen billowing to the east of the city center, its precise cause unclear.

While the curfew imposed by Kyiv authorities officially lifted at 7 a.m., the city remained eerily silent, with many residents choosing to stay put.
Though the atmosphere was nervous, however, there was sense of calm — and resolve — among those CNN spoke to.

Alex Klymenok, a 27-year old lawyer, told CNN on Thursday that this was no time to panic. “All they want us to do at this moment is to panic,” he said of the Russian forces.

Maryna, who lives in Kyiv, has been sheltering in a subway station since Thursday. “There are a lot of families with kids and animals here. We are not that far from Obolon, where sabotage and reconnaissance force recently landed. That’s why I’m here,” she told CNN in a message on Friday.

Maryna, who brought her cat Hermes to the shelter with her, marveled at how calm everyone there was. She said there was enough food and water for everyone.

“Children are playing ball, someone is sleeping, someone is reading the news. No panic. I rarely see such kind-hearted people that Ukrainians turn into in the face of danger,” she said.

Many of Kyiv’s residents have already left. The roads heading west of the capital were busy on Thursday morning and throughout the day. On Friday, that traffic was all gone.

Yana and Sergii Lysenko, a young couple who initially chose to stay in Kyiv after hearing the first explosions on Thursday morning, also decided to flee.

They first thought their apartment in the city center was safer than the traffic-clogged roads heading out west. That changed in the afternoon when they heard an explosion nearby.

Within an hour, they decided to leave, packed what they could, and started out for Ternopil, a town 300 miles west of Kyiv, about 120 miles from the Polish border.

“The last thing was when we heard the bomb, that’s why we decided to get out … we have a little child,” Yana told CNN from the car, as they were driving away.

The Lysenkos told CNN they encountered many checkpoints along the way. “A lot of our guys, our army is the best, because they asked where we are going, (and said) everything is okay. They say that we will win,” Yana told CNN.

During the night, as the young family drove west, an apartment building on the left bank of the city, east of the Dnieper river, caught fire after it appeared to be hit by debris.

And in a separate incident, a Ukrainian Sukhoi Su-27 fighter jet was shot down over the capital in the early hours of Friday morning.

Pictures from the emergency services showed a two-story home on fire after fragments of a plane fell on it, although it was unclear if they were from the Su-27 jet.

Some of Kyiv’s residents chose to spend the night in one of the city’s numerous bomb shelters. While the transportation system was suspended overnight, its more than 50 stations were supposed to remain open to anyone seeking shelter.

However, at least one incident of people not being to enter the shelter was reported overnight, Kyiv’s Deputy Mayor, Kostiantyn Usov, said in a statement on Facebook.

Usov described banging on the door of the Polytechnic Institute station for “five to seven minutes” before being let in.

People who knocked and presented their identification documents were let in.

As the sirens continued to wail through the streets of Kyiv, more information was emerging about Russian troops’ presence inside the wider city. The Ukrainian Defense Ministry said the country’s airborne assault troops blew up a bridge over the Teteriv River at Ivankiv, about 30 miles north of Kyiv, to prevent a Russian column of forces from advancing toward the capital.

While the ministry said the Russian advance was stopped, the sounds of explosions became more frequent around noon, not giving much hope to the terrified — but calm and resolute — people of Kyiv.

US concerned Kyiv could fall to Russia within days, sources familiar with intel say