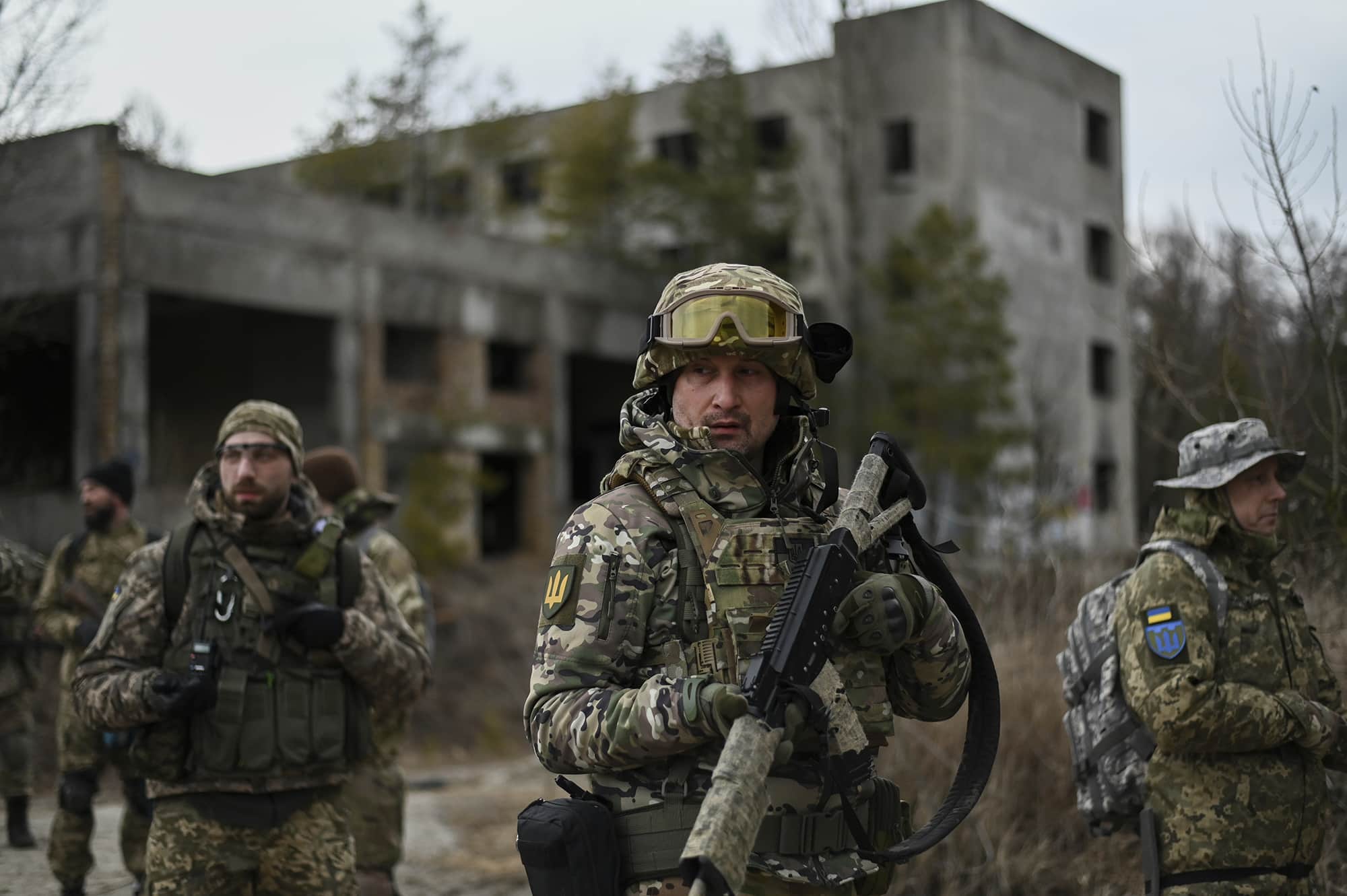 (CNN) — A state of emergency is to be introduced across all parts of Ukraine under government control, officials said Wednesday, while President Volodymyr Zelensky said reservists would be called up as Russian forces remain massed along Ukraine’s borders, as fears of an incursion mount.

Ukrainian, US and western officials told CNN that Washington on Tuesday warned Zelensky’s government that the latest intelligence points to an imminent full-scale Russian invasion. A senior Ukrainian official said Kyiv has not verified the intelligence and noted that the United States has issued similar warnings before, about assaults that ultimately did not materialize.

NATO allies have been given a similar intelligence assessment warning of an imminent Russian attack, according to a NATO military official. The official cautions that “no one knows for sure” what Putin is going to do.

Zelensky introduced the state of emergency two days after Russian leader Vladimir Putin ordered troops into separatist-held parts of eastern Ukraine. Moscow on Monday recognized those enclaves as independent, a blatant violation of international law that could spark a broader conflict in the region. US President Joe Biden called the events now underway in Ukraine the “the beginning of a Russian invasion,” and Western nations responded by instituting a raft of sanctions against the Kremlin.

The Prime Minister of Latvia, a NATO member, and sources familiar with the latest US intelligence assessments said Russian troops have moved into the Ukrainian regions Moscow recognized as “independent.”

Ukraine’s leaders said they are instituting a state of emergency to prevent Russia from sowing chaos inside its eastern neighbor.

“Across the territory of our country, apart from Donetsk and Luhansk, a state of emergency will be introduced,” Oleksiy Danilov, secretary of Ukraine’s National Security and Defense Council, told a press briefing Wednesday in Kyiv.

“The main aim of the Russian Federation is to destabilize Ukraine from inside and to achieve its objective. To prevent this from happening, we decided today and made this decision today.”

The emergency measure is expected to be approved by the Ukrainian Parliament within 48 hours. It would last for 30 days and can be extended for an extra 30 days.

The state of emergency would include “strengthening public order and security at critical infrastructure facilities” and tightening inspections on certain transportation movements, Danilov said.

“Depending on the local circumstances, there may be stronger or milder measures to ensure the security of our country,” he added. “These are all preventative measures, in order to preserve peace and calm in the country and for the economy to continue to work.”

A state of emergency has been in place in Ukraine’s separatist-controlled regions of Donetsk and Luhansk since 2014, when pro-Russian separatists took control.

Ukraine’s leaders insist they are still seeking a diplomatic resolution to the crisis, at the same time as readying the country for any potential conflict.

President Zelensky announced Tuesday that reservists would be called up for military training but said there would be no general mobilization of the armed forces. He also stressed that he was still pursuing diplomacy as a way out of the crisis.

Notwithstanding such diplomatic efforts, Ukraine’s response to any potential attack by Russia “will be instant,” Danilov said Wednesday. “We are aware of the risks posed by the Russian Federation. We have a clear understanding that our army is ready to respond. It does not matter which city is under attack by Russia — we are ready for it,” he added.

“With regards to mobilization, this is a separate decision. At the moment, there has been no such decision. If the need arises, it will be approved — it has not been approved yet,” he added.

‘Ready to defend my country’

Ruslan Borovyk is one the reservists being called up. He served in the Ukrainian army when the war in eastern Ukraine started in 2014 and 2015 and fought in the two battles for Donetsk airport. He also served in Iraq in 2004 and 2005. He became a reservist and has worked in an organization supporting Ukrainian veterans, but now he is getting ready to possibly fight again.

“I’m a conscious citizen, I’m a patriot of my country and, of course I’m ready. I’m always ready to defend my country. If we were to give in to Putin’s terms and conditions, and we’re not sure in our strength, then in 2014 we would have lost,” he told CNN.

“If you know the history of Ukraine, at least every 50 years, we had some conflicts with the Russian Empire. We had conflicts all the time. And at this time we are ready. We’re not gonna lose, nobody’s welcoming Putin here, there is no easy path for him. I’m confident in my country, in my army and in my people,” he added.

It’s not just the reservists getting drafted. The recruitment center of Ukraine’s Territorial Defense Force across the street from Kyiv’s town hall was buzzing with activity on Wednesday. The force is comprised mostly of civilian volunteers who receive military training and are charged with protecting key sites.

“In the summer, we received two to four calls in a week,” said Pavlo Shchybria, who was manning the information desk, collecting contact details from the volunteers and advising them how to proceed.

Dmytro Ovsienko was one of those coming to the center to sign up on Wednesday. The 24-year old said he had been thinking about it for a while and decided now was the right moment.

“In 2014 and 2015, I wasn’t 18 yet, so I couldn’t sign up and then I had an operation so I wasn’t fit enough,” he said. “But now, I understand that now is the time. I cannot wait any longer. The longer we wait, the worse the situation gets. So if everybody just sits and waits, nothing good happens,” he said.

Despite the tensions, the mood in Kyiv appeared calm Wednesday. People were out and about shopping and taking lunch breaks, with no sign that supermarket shelves were being cleared of essential goods.

“We are in Kyiv city and maybe you have seen that there is no panic. Nobody is buying up food, nobody is stocking up on medication, the stores are operating normally, all the institutions are working,” Borovyk said.

At the same time, new satellite images from Maxar Technologies show that in recent days additional troops, vehicles and logistics infrastructure have been deployed to the Ukrainian border by Russia.

Social media videos geolocated and analyzed by CNN over the past several days appear to show the continuing build-up of armor and support vehicles in two regions just 30 kilometers (19 miles) from Ukraine’s northeastern border.

Putin said in a video message Wednesday that the country’s interests were “non negotiable” — but insisted he was open to dialogue for “the most difficult problems.”

“We see how difficult the international situation is developing, what dangers the current challenges pose, such as weakening of the arms control system or the military activity of the NATO bloc,” Putin said in a clip released by the Kremlin for a Russian national holiday, Defender of the Fatherland Day.

“At the same time, Russia’s calls to build a system of equal and indivisible security that would reliably protect all countries remain unanswered,” he added.

Russia is “always open for direct and honest dialogue, for finding diplomatic solutions to the most difficult problems,” he added. “But I repeat: Russia’s interests and the security of our citizens are non-negotiable for us.”

The press attaché for Russia’s embassy in Kyiv, Denis Golenko, told Russian state news agency RIA Novosti on Wednesday that the departure of diplomatic staff from the embassy had begun.

Last week, the leaders of the Russian-backed self-declared Donetsk and Luhansk republics ordered the mass evacuation of women, children and the elderly to Russia, while barring men aged 18 to 55 from leaving.

Denis Pushilin, leader of the self-declared Donetsk People’s Republic (DPR), said Wednesday that the situation had become critical in the face of what he called “Ukrainian aggression,” but added that the separatists would win with the help of what he called “the Russian world.”

“Russian troops are not here at the moment,” he said. “Is it possible for Russian troops to be here? Maybe. If there is a full-scale offensive, Russia, within the framework of the agreement, has the right to do so.”

Ukraine’s defense minister said that, as of Wednesday evening local time, territory under Ukrainian control had been shelled 59 times from the self-declared republics of Luhansk and Donetsk. One Ukrainian serviceman was killed and another injured, according to the ministry.

The separatists in Donbas have had substantial backing from Moscow since 2014, when the conflict in eastern Ukraine first erupted, shortly after Russia’s illegal annexation of Ukraine’s Crimean peninsula.

Russia has long maintained that it has no soldiers on the ground there, but US, NATO and Ukrainian officials say the Russian government supplies the separatists, provides them with advisory support and intelligence, and embeds its own officers in their ranks.

Details of EU sanctions to come

In a national address Tuesday, Ukraine’s President welcomed an offer by Turkey to broker talks between Ukraine and Russia and called for a summit of all permanent members of the UN Security Council along with Germany and Turkey.

US President Joe Biden described the events underway in Ukraine as “the beginning of a Russian invasion” as he announced new sanctions against Moscow on Tuesday.

Latvian Prime Minister Arturs Krišjānis Kariņš told CNN’s Jim Sciutto on Wednesday: “According to the information at my disposal, Putin is moving additional forces and tanks into the occupied Donbas territories,” . “By any definition that’s a crossing of a sovereign territory into a neighboring country.”

Pressed specifically on whether he was referring to the entry of additional Russian troops since Moscow recognized the two separatist regions earlier this week, Kariņš replied: “Yes, according to the information at my disposal, this is exactly what we’re seeing.”

CNN has been unable to independently verify this.

The Russian Embassy in London denied its troops had entered any disputed territory. In a strongly worded response to UK sanctions on Wednesday, the embassy said “it is well known that they have not entered those territories.” Moscow called the UK sanctions “illegal.”

In addition, Russia warned that US sanctions would hurt global financial and energy markets, and that “ordinary Americans will also feel the consequences.”

“An element” of the EU sanctions will be “to break and challenge the links between the finance and capital markets of the European Union and Russia,” he said.

Russia’s Ministry of Finance announced measures Wednesday it said would ensure the stability of its access to debt markets, in response to US sanctions on Russia’s sovereign debt.

CNN Exclusive: US intel and satellite images show Saudi Arabia is now building its own ballistic missiles with help of China

Is your employer asking for COVID vaccine — a HIPAA Violation?