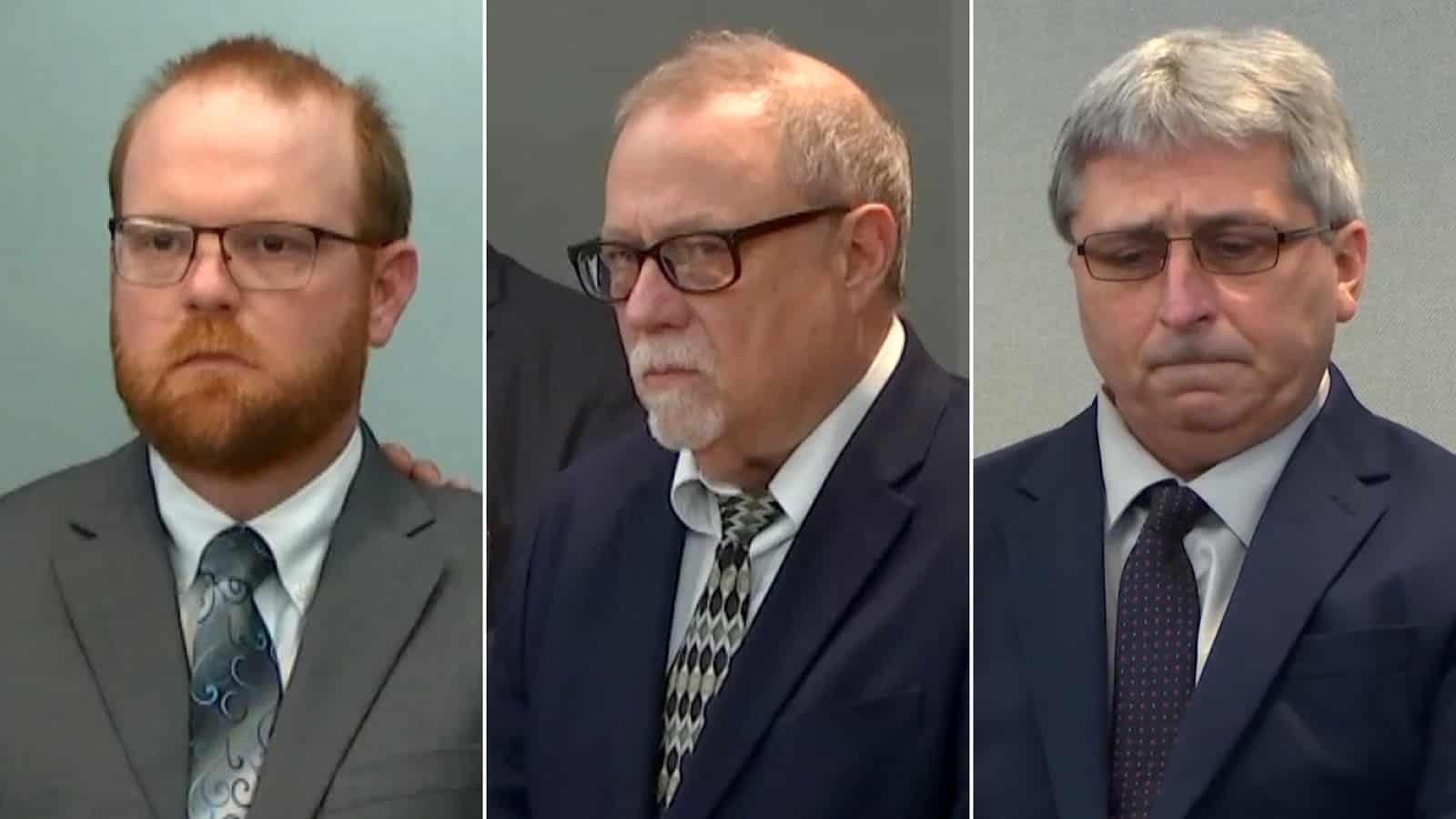 (CNN) — A jury has found the three White men who killed Ahmaud Arbery in 2020 guilty of all charges in their federal hate crimes trial, backing prosecutors’ case that the men chased the 25-year-old through the streets of a Georgia neighborhood because he was Black.

The verdict comes nearly two years to the day that Arbery was killed in a neighborhood outside Brunswick on February 23, 2020. And it’s months after the three were convicted in a state court in November of murder.

Arbery’s relatives held each other and cried — and several jurors wiped tears away from their own faces — as Tuesday’s verdicts were read in the federal courtroom in Brunswick.

Outside the courthouse, Arbery family attorney Ben Crump took the hands of Arbery’s mother Wanda Cooper-Jones and father Marcus Arbery Sr. and raised them in victory.

“Thank God for this good morning, that Wanda and Marcus have prayed for. It is because of their conviction to get full justice, not partial justice … (that) we get to celebrate this moment,” Crump told reporters.

Cooper-Jones thanked the Justice Department for bringing the federal charges, but criticized it for initially reaching a plea deal with the McMichaels in the case. The McMichaels had agreed to plead guilty before trial, but the the judge overseeing the case rejected the deal after Arbery’s family raised concerns that the resulting sentence could lead to favorable imprisonment conditions.

Cooper-Jones said that she spoke to federal prosecutors and “begged them” to not take the plea deal in the case, and “they ignored my cry.”

“What we got today, we wouldn’t have gotten today if it was not for the fight that the family put up,” Cooper-Jones said. “What the (Department of Justice) did today, they were made to do today.”

US Attorney General Merrick Garland — responding in Washington Tuesday to a reporter’s question about Cooper-Jones’ statement — appeared to choke up as he answered.

“I cannot imagine the pain that a mother feels to have her son run down, and then gunned down, while taking a jog on a public street,” Garland said at a Justice Department news conference. “My heart goes out to her and to the family. That’s really all I can say about this.”

Before taking that question, Garland thanked prosecutors for their work on the case, and said “no one should fear that if they go out for a run, they will be targeted and killed because of the color of their skin.”

“Although we welcome the jury’s verdict, the only acceptable outcome in this matter would have been Mr. Arbery returning safely to his loved ones two years ago. … Ahmaud Arbery should be alive today,” Garland said.

Crump said he and the family plans to bring a civil suit once the criminal proceedings have concluded.

For the federal convictions, the three men could now receive up to life in prison and steep fines, on top of the life sentences they received for their previous murder convictions. Sentencing will be scheduled after pre-sentencing reports are filed, the judge said.

When the verdict was read, the three defendants gave no discernible reaction. Leigh McMichael, mother of Travis McMichael and wife of Gregory McMichael, was in the courtroom and remained stoic.

Tuesday’s verdict came after more than three hours of deliberations that started Monday, and after days of testimony last week.

Prosecutor: Defendants did not see Arbery ‘as a fellow human being’

In the federal trial, prosecutors sought to prove the three men acted out of racial animus. Prosecutors homed in on testimony detailing how all three defendants spoke privately and publicly about Black people using inflammatory and derogatory language, including racial slurs.

During closing rebuttal arguments on Monday, prosecutor Tara Lyons emphasized the state’s position that Arbery was killed because he was Black.

“The three defendants did not see 25-year-old Ahmaud Arbery as a fellow human being,” Lyons said.

Federal prosecutors and Arbery’s family have said he was out on a jog when the defendants chased and killed him.

Defense attorneys in both trials contended the McMichaels, suspecting Arbery of trespassing multiple times at an under-construction home, pursued him in a pickup truck through neighborhood streets to stop him for police. Travis McMichael argued he shot Arbery in self-defense as they wrestled over McMichael’s shotgun.

Bryan joined the pursuit in his own truck after seeing the McMichaels follow a running Arbery in their pickup, and recorded video of the shooting.

Prosecutors at both trials conceded Arbery was at the construction site several times, including the day of the shooting, but always without breaking in or taking anything, and never doing anything that would allow the men to pursue or stop him. They argued that White people visited the site apparently without being chased, and that the pursuers did not actually see Arbery at the site that day and had no knowledge he’d committed a crime.

Defense attorneys didn’t deny their clients used offensive language, but argued their actions toward Arbery were not due to his race.

Jogging was a common pastime of Arbery’s, according to those who knew him.

The Satilla Shores neighborhood is less than 2 miles from the home where he lived with his mother, authorities have said.

Arbery played football at Brunswick High School. In May 2020, his former coach called on people to run 2.23 miles — symbolic of the date Arbery died — in his honor. Runners around the world responded and documented their runs using the hashtag #IRunWithMaud on what would have been Arbery’s 26th birthday.

After Arbery’s death, two prosecutors initially instructed Glynn County police not to make arrests. But about two months later, a copy of Bryan’s video of the killing surfaced, sparking a nationwide outcry.

The McMichaels were arrested May 7, 2020, and Bryan was taken into custody two weeks later. The case soon dovetailed with the killings of three Black people — Breonna Taylor in Louisville, Kentucky, George Floyd in Minneapolis and Rayshard Brooks in Atlanta — redoubling angst over racial injustice and civil unrest nationwide.

Prosecutor Christopher J. Perras spoke at the start of the prosecution’s closing arguments Monday, going through evidence presented in trial, including Facebook posts made by Greg McMichael, texts and posts by Travis McMichael and Bryan’s use of a derogatory phrase in messages to friends.

In one example, under a Facebook video appearing to show a group of primarily Black teenagers beating a White teen, Travis McMichael commented, “I say shoot them all,” and referred to the group as “monkeys,” according to testimony from an FBI intelligence analyst.

Perras said the three pursued Arbery in a fit of vigilantism — and they did it because they saw “a Black man in their neighborhood and assumed the worst of him.”

Perras argued the defendants, after Arbery’s killing, falsely told police Arbery had been caught breaking into houses. That was part of a pattern, Perras said, showing the defendants knew what they had done wrong and were trying to get away with it. The men were not charged until more than two months after the shooting.

Perras argued Bryan’s pursuit of Arbery — after seeing Arbery running from the McMichaels’ truck — was based on race, citing testimony that Bryan didn’t know precisely what was happening or asked what the pursuit was about.

“He didn’t ask Ahmaud, ‘Are you OK?’ … (He assumed) the Black man was in the wrong and the White guys were in the right. … That’s how hard-wired his racial assumptions were,” Perras said.

Defense attorneys on behalf of each of the three men also spoke Monday in closing remarks, pushing back against prosecutors’ arguments.

J. Pete Theodocion, a defense attorney for Bryan, countered that Arbery never asked for help, and said Bryan would have joined the pursuit regardless of Arbery’s race. What Bryan saw was two people — in a truck he recognized from the neighborhood — asking Arbery to stop, and Arbery wasn’t stopping.

“It was entirely reasonable” to assume the person being chased did something wrong, Theodocion said. Bryan “absolutely” had “enough evidence” to follow in his own vehicle at a slow speed and record video, the lawyer said.

Amy Copeland, a defense attorney for Travis McMichael, said there is no evidence her client used a racial slur on the day Arbery was murdered, no evidence he was part of a hate group, no evidence of racial violence committed by McMichael and no evidence he talked about Arbery’s death in racial terms.

The defense attorney for Greg McMichael, attorney A.J. Balbo, told the jury his client had tenants who were people of color.

The defense argued at the state murder trial that the pursuit began when the elder McMichael saw Arbery running from the direction of the under-construction home, and that he believed he matched the description of someone who had been recorded there previously — and of someone Travis McMichael had encountered and called police about 12 nights earlier.

Unbeknownst to the McMichaels on the day of the shooting, a neighbor had just called police to report that Arbery was at the construction site alone, and that Arbery ran as the neighbor called, according to testimony.

In closing arguments Monday, Perras said Arbery’s reason for being there was irrelevant to the legality of the defendants’ pursuit of him.

But he stressed the property owner’s testimony that nothing was taken, and that video never showed anything taken.

“Maybe Ahmaud was interested in seeing the progress … (or) to clear his mind … to get away from it all. … We’ll never know for sure” because he was killed, Perras said.

How a battery shortage could threaten US national security

Rape, 2 stabbings on SEPTA over the weekend under investigation

Body of a Texas National Guard member found, identified 3 days after he tried to pull migrants from the Rio Grande River