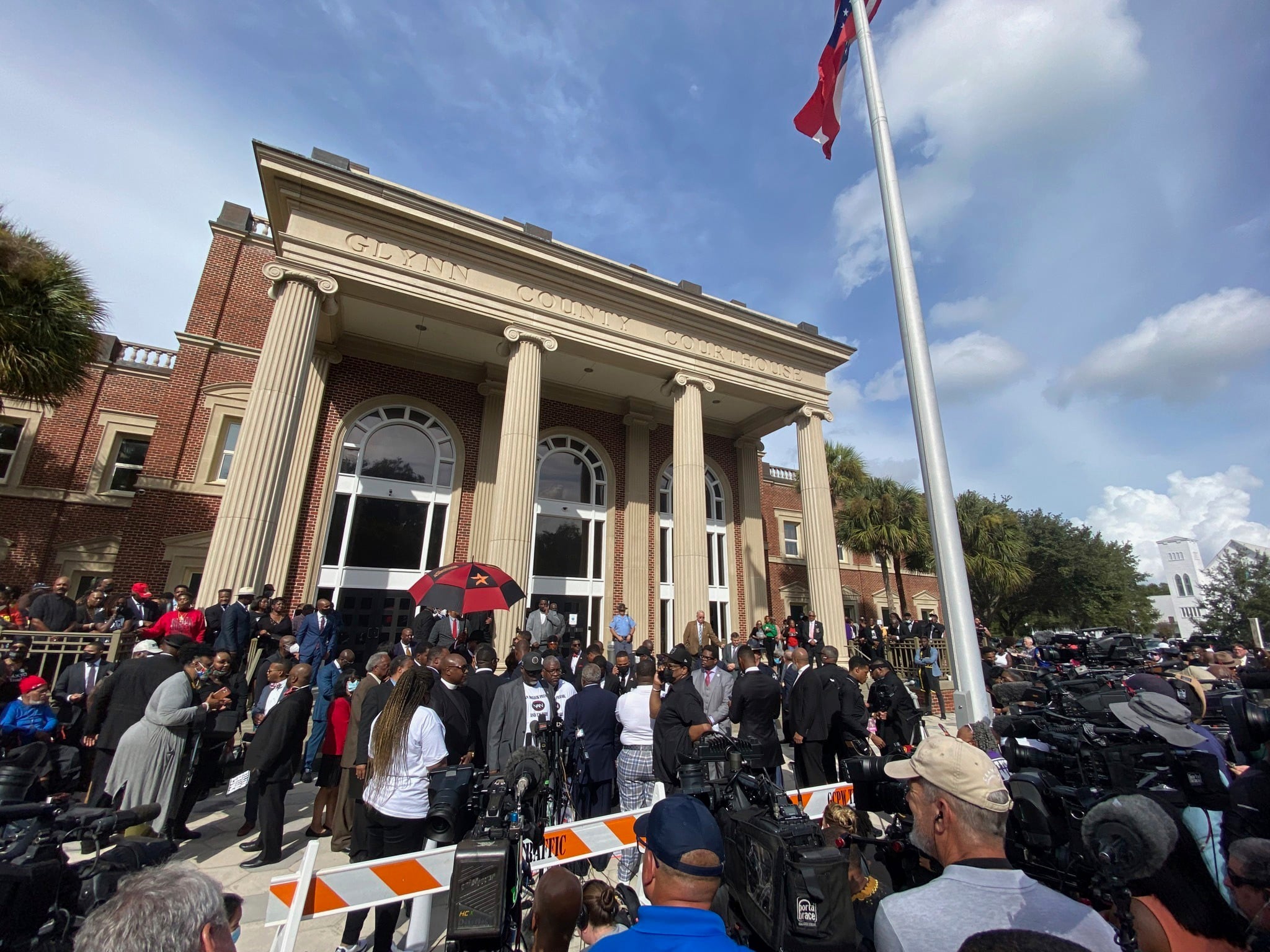 (CNN) — Three men’s reasons for chasing — and one of them fatally shooting — Ahmaud Arbery in Glynn County, Georgia, are “not legitimate at all” and were based on “assumptions and driveway decisions,” a prosecutor said during closing arguments in the murder trial.

The men, prosecutor Linda Dunikoski said, want the jury to believe they were conducting a citizen’s arrest and that Travis McMichael acted in self-defense in shooting Arbery, but in actuality, the men acted on gossip and rumors and had no immediate knowledge Arbery had committed a crime, which is required to claim citizen’s arrest.

“The state’s position is all three of these defendants made assumptions — made assumptions about what was going on that day and they made their decision to attack Ahmaud Arbery (while they were) in their driveway because he was a Black man running down the street,” she said.

The arguments follow 10 days of proceedings and testimony from 23 witnesses. The defense rested Thursday. Lawyers and the judge worked Friday on jury instructions.

The three White men — Travis McMichael, his father Gregory McMichael and their neighbor William “Roddie” Bryan Jr. — face charges including malice and felony murder in the killing of Arbery, a Black man who was chased by the trio February 23, 2020, in the Satilla Shores neighborhood near Brunswick. They have pleaded not guilty.

The judge has allotted three hours for both sides to state their cases. One defense attorney interrupted Dunikoski’s closing to tell the judge he felt she was misstating the citizen’s arrest law.

Dunikoski was emphatic that the McMichaels and Bryan were not law enforcement but rather the “initial, unjustified aggressors” in the incident, and none of them mentioned citizen’s arrest to police because they had no first-hand knowledge of a crime being committed.

In order to claim you are exacting a citizen’s arrest, Dunikoski said, defendants cannot be the initial aggressor or commit a felony during the arrest. “Wanting to question Ahmaud demonstrates uncertainty,” Dunikoski said, and Arbery was simply being a “looky loo,” inspecting an under-construction home and nothing more, she said.

The defendants committed multiple felonies, she said, pointing out that Arbery tried to evade the men for five minutes before Travis McMichael confronted and killed him. She also sought to cast doubt on the notion Arbery was the aggressor when he was unarmed on foot and being chased by three men, two of them armed, in two trucks.

In addition to murder charges, the defendants also face counts of aggravated assault, false imprisonment and criminal attempt to commit a felony.

Before the defense teams began their closing arguments, Dunikoski expressed “grave concerns” — because she saw attorney Jason Sheffield flipping through photos and a “use-of-force diagram” — that the defense attorney was “about to show the jury a whole bunch of stuff they’ve never seen.” Sheffield countered the items in question are “just demonstrative things” and Travis McMichael had indeed testified about his training and use of force.

After some back-and-forth, the judge permitted Sheffield to move forward, and Dunikoski warned if she had to object more than twice during closings that she would request that the judge stop the closings and “go through every single slide” before moving forward.

Arbery’s family has said he was out for a jog — a common pastime for the 25-year-old — when he was killed.

Defense attorneys say the McMichaels, suspecting Arbery of burglary, tried to conduct a citizen’s arrest. Bryan, the defense says, saw the McMichaels chasing Arbery, joined the pursuit and attempted to cut Arbery off, before recording video of the younger McMichael shooting Arbery.

Travis McMichael testified he shot Arbery in self-defense as he and Arbery wrestled over McMichael’s shotgun.

The McMichaels, according to their attorneys, and several neighbors were concerned about people entering an under-construction home — and Travis McMichael had encountered a strange man in the neighborhood nearly two weeks before the shooting.

According to testimony, a neighbor called police February 23 to say a man — later identified as Arbery — was at the construction site. Arbery ran off as the man called police, the neighbor testified.

Gregory McMichael, investigators testified, said he saw Arbery run by the McMichaels’ home and gave chase, believing Arbery matched the description of someone who had been at the site.

The prosecution has said surveillance videos show Arbery there multiple times, including the day he was killed, but he never broke in or took anything. Witnesses also testified the McMichaels did not know at the time that Arbery had been at the site that day.

The property’s owner, Larry English Jr., testified in September he probably told the McMichaels about incidents on his property, but he never authorized the McMichaels to confront anyone.

Bryan, prosecutors allege, saw the chase and — not knowing what was happening — got in his truck and joined the pursuit, at one point striking Arbery with his vehicle.

Travis McMichael eventually drove ahead of Arbery, he testified, parked his vehicle, exited and pointed his shotgun at Arbery, telling him to stop. He testified Arbery darted to him, grabbed the rifle and struck McMichael before he then shot Arbery.

Dunikoski challenged McMichael over what she said were inconsistencies in his accounts, including when and where he told Arbery to stop. When he first spoke to police, she said, he could not remember if Arbery grabbed the gun and he failed to mention that he and his father were making a citizen’s arrest, a key point of the defense.

McMichael was “scattered” and “mixed up” in the hours after the shooting, he responded.

“This is the most traumatic event I’ve ever been through in my life,” he said.

McMichael also acknowledged several times that he never saw Arbery armed, never heard Arbery threaten him and that Arbery showed no interest in conversing with McMichael.

Bryan nor Gregory McMichael took the stand, and defense attorney Jason Sheffield suggested health concerns may have played a role in the latter’s decision not to testify.

The matter of race

The trial has touched on a number of issues: the role of race in the criminal justice system, how video evidence can spur action and the limits of self-defense rights.

In a county that is 69% White residents and 27% Black, 11 of the 12 jurors are White. Judge Timothy Walmsley said before opening statements the court has “found that there appears to be intentional discrimination” in the jury selection, but he allowed the case to move forward.

While civil rights attorney Ben Crump, who is representing Arbery’s father, was critical of the jury makeup, Gough complained that older White men from the South without four-year college degrees, “euphemistically known as ‘Bubba’ or ‘Joe Six Pack,'” seemed underrepresented in the jury pool.

The case took a circuitous path to trial. Charges were not filed against the defendants for months until Bryan’s cell phone video emerged, sparking widespread outrage, and two prosecutors recused themselves due to conflicts of interest, citing their proximity to Gregory McMichael during the former law enforcement offcer’s career. Ultimately, prosecutors in Georgia’s Cobb County — more than 200 miles away — were appointed to the case.

If convicted on one of the murder charges, each man could face life in prison without the possibility of parole. All have pleaded not guilty.

All three men have also been indicted on federal hate crime and attempted kidnapping charges.