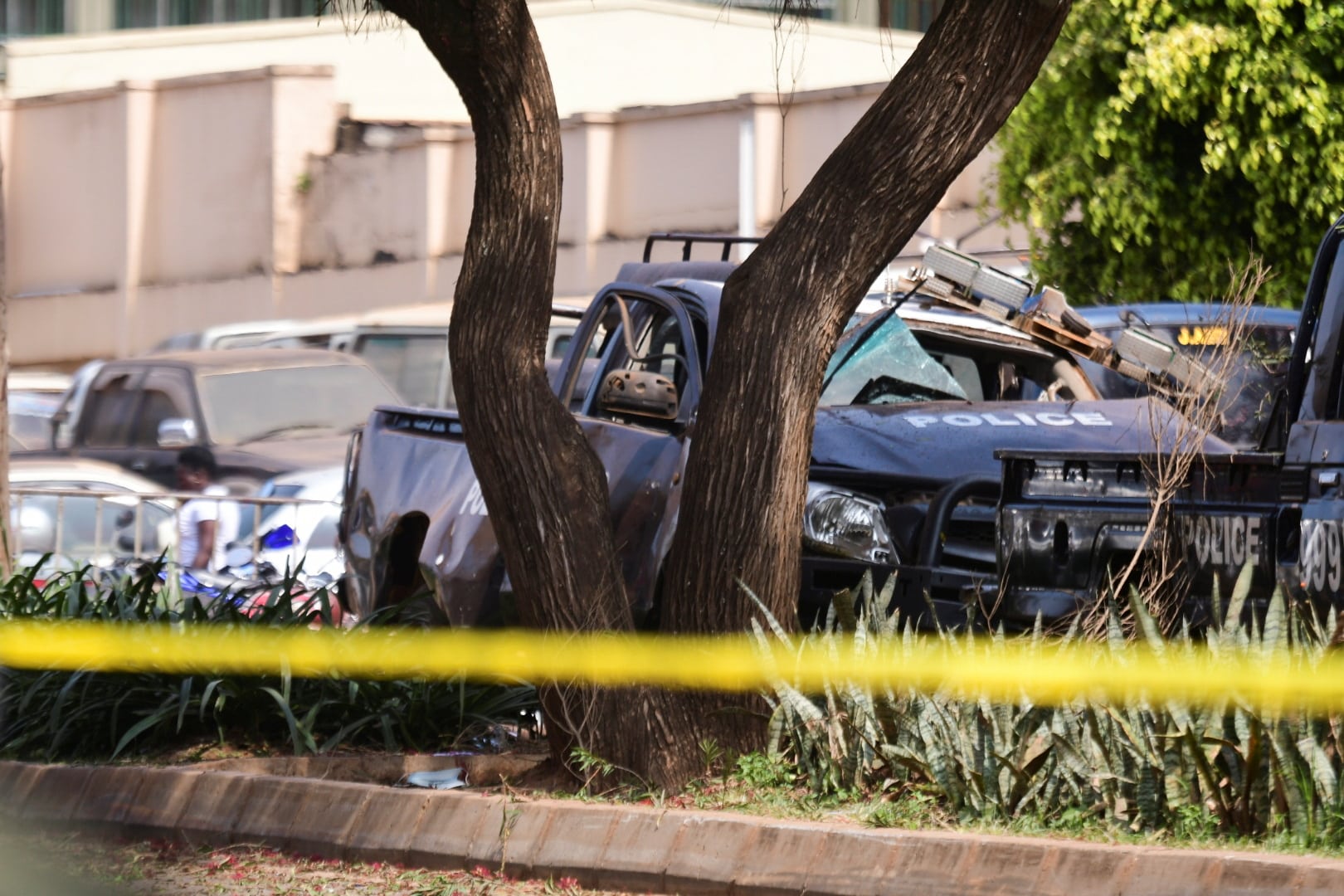 (CNN) — At least three people were killed and 33 injured in two separate suicide attacks in the Ugandan capital, Kampala, on Tuesday morning, according to police.

Two civilians and a police officer were killed in the blasts, police spokesperson Fred Enanga told reporters at a news conference in the city. Three suicide attackers also died.

Police have yet to determine the total number of victims as a team of forensic experts are still documenting the scene, Enanga added.

The two explosions rocked the city center within five minutes of each other. Police said CCTV footage showed an adult male carrying a backpack detonating himself at 10:03 a.m. local time near the Central Police Station. Enanga said the attacker died instantly.

Two people have been confirmed dead at the scene of the first blast, while 17 others sustained critical injuries, Enanga said in a statement.

Three minutes after the first explosion, two suicide bombers on motorcycles were seen detonating themselves near Raja Chambers and Jubilee Insurance Building along the central Kampala Parliament Avenue, Enanga said. The two bombers died and the body of a civilian was also found at the site, he added.

Enanga said 33 people were injured in the two blasts; five of them are in critical condition. The wounded are being treated at the Mulago National Referral Hospital.

Police pursued a fourth bomber, Enanga said, adding that two further bombs were recovered from his home that will be detonated safely.

Ugandan state minister Kabbyanga Godfrey Baluku Kiime tweeted about the explosion, saying: “There has been a bomb blast at the headquarters of [the Ministry of Information and Communications Technology and National Guidance]. All of us are safe. A few colleagues were hurt by flying window glasses and debris.”

He urged members of the public to remain vigilant, warning that: “the bomb threats are still active, especially from suicide attackers.”

Traffic in Kampala has been severely restricted following the explosions, with authorities urging public to close businesses and leave the area.

Police and army personnel cordoned off streets around the blast site and several ambulances were deployed.

Images on social media showed several people lying on the streets near the entrance of Central Police Station and Kampala’s High Court.

At Parliamentary Avenue, where the second explosion occurred, all streets have been cordoned off by security, with legislators and parliamentary staff evacuated.

Last month, an explosion in Kampala killed at least one person and injured several others. Reuters reported that the Islamic State had claimed responsibility for that blast.

Correction: This story has been updated to clarify that two civilians and a police officer were killed, not three police officers as previously indicated.