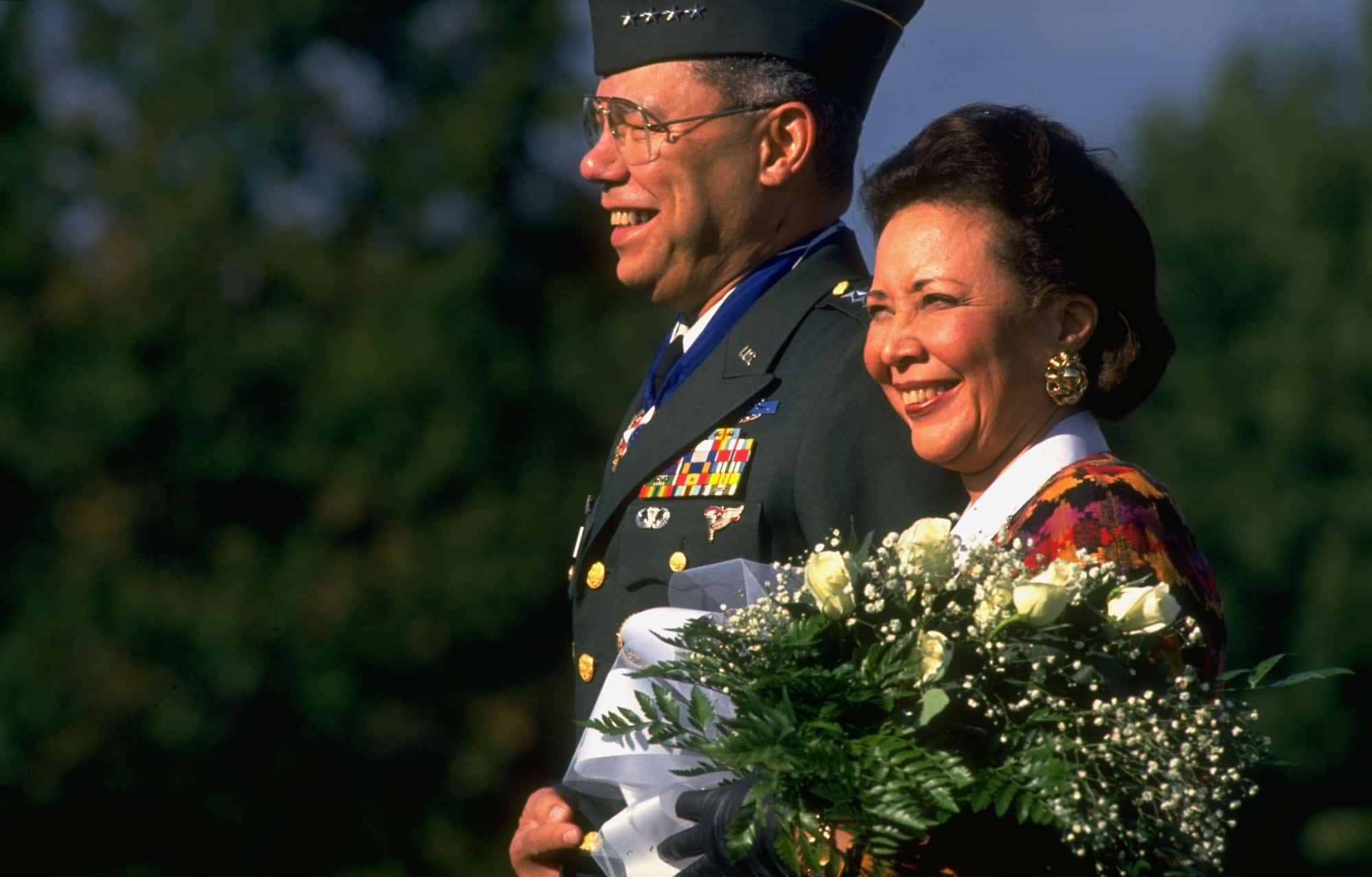 (CNN) — From the streets of New York to the Vietnam battlefields and the power corridors of Washington, Colin Powell broke racial barriers to become one of the nation’s top diplomats.

Beside him all along was one quiet force: Alma Johnson Powell.

Colin Powell died at 84 this week of coronavirus complications after fighting cancer. As a US Army general and statesman, he met some of the world’s most influential leaders. But when journalist Bob Woodward asked him the greatest person he’s ever known, his answer, without hesitation, was his wife of over half a century.

Their marriage demonstrated that love, respect and honor go hand in hand, said Andra Gillespie, an associate political science professor at Emory University in Atlanta. She cited Powell wife’s objection to his running for president in 1996 despite Republican pleas and polls in his favor.

At the time, Alma Powell described the hate mail and random phone calls they received as her retired four-star general husband contemplated making a bid to become the nation’s first Black president.

“Being asked to run for president is probably the biggest stroke to one’s ego a person could possibly have,” Gillespie said. “To turn it down because one’s spouse objects to running is a testament to how much Colin Powell valued his marriage and how much he respected his wife’s opinion.”

Before Powell left for Vietnam, he was a single soldier in his 20s trying to navigate relationships against the backdrop of military life. One blind date in November 1961 changed everything.

In his autobiography, “My American Journey,” Powell recalls how his Army roommate, Michael Heningburg, asked him to “run interference” for him by entertaining a friend of a girl he was interested in.

At the time, Powell preferred to be single. But he decided to meet the friend nonetheless for a double date at a Boston club. That friend turned out to be Alma Johnson, and he was awestruck.

“She was fair-skinned with light brown hair and a lovely figure. I was mesmerized by a pair of luminous eyes, an unusual shade of green,” he wrote. “(She) moved gracefully and spoke graciously with a soft Southern accent.”

Alma Johnson wasn’t exactly thrilled about going out with a soldier, Powell wrote in the book. She reluctantly agreed to the outing — but piled on makeup and wore weird clothes to repel any ideas of a future date.

But as soon as she peeked into the room and saw the shy, baby-faced soldier waiting to take her out, she was curious about him. She vanished into the bathroom, redid her makeup and changed her clothes, he wrote.

At the time, she worked as an audiologist for the Boston Guild for the Hard of Hearing. A night of music, drinks and conversations about their professions led to a second date. Before long, they were exclusive.

At first, he wasn’t sure she’d fit in

Powell was smitten — but he wasn’t sure how she’d fit into his loud, West Indian family. She’d grown up in Birmingham, Alabama, while he was the son of Jamaican immigrants in New York’s Bronx borough. Parties at his house were loud and ran all night or until the rum dried out — whichever came first.

“A well-bred girl from a proper Southern family needed to be exposed gradually to noisy, noisy, fun-loving West Indians,” Powell wrote in his autobiography.

His family loved Alma Johnson, and her feelings were mutual. She met all his bachelor and couple friends in the military. Compared to the segregation in the South, she was fascinated by the military’s social integration, Powell wrote.

Her father was an influential principal at a Birmingham school for Black students in the 1960s, a time when the state was in the throes of the civil rights movement.

By the summer of 1962, just before President John F. Kennedy ordered Powell to go to Vietnam as part of a group of advisers, he proposed to his girlfriend.

Powell’s father was so wary of the racial conflict in Alabama at the time, he threatened not to go to the wedding in her hometown. “You wouldn’t catch me dead in Birmingham,” Luther Powell is quoted as saying in his son’s book. “I’ll send you a telegram with my best wishes.”

But when he found out his daughter and son-in-law — an interracial couple from Buffalo, New York — would brave the trip to the South for the wedding, he had to rethink his stance. The Powells were married at Birmingham’s First Congregational Christian Church on August 25, 1962.

An ecstatic Luther Powell watched them exchange vows at the crowded church, his son wrote. But parties were different in the South. He was stunned that there was no alcohol or music at the reception.

She faced challenges as a military wife

In 1989, after serving as national security adviser, he rose to the rank of a four-star general before becoming the first Black chairman of the Joint Chiefs of Staff and later secretary of state.

Nothing prepared Alma Powell for the challenges of being a soldier’s wife.

Four months after they got married, she said decades later in an interview on military spouses, he was sent to Vietnam. Back then, military spouses relied on letters to stay in touch.

“You were truly isolated from your family member,” she said in the 2006 interview. “Our son was born while he was in Vietnam, and he didn’t know he was born until he was two weeks old because there was no instant communication. He was in the jungle near the Cambodian border.”

She navigated the first few years of her life as a newlywed alone, calling it “the defining experience of my life.”

With their children, Michael, Linda and Annemarie, the family bounced from one post to another in Colin Powell’s decades of military service. In addition to living on various bases in the United States, he served two tours in Vietnam, was stationed in South Korea and West Germany, and oversaw Operation Desert Storm in Iraq.

“Part of who I am is because of my career as a military wife. I think of the military as family,” Alma Powell said. “During the course of our young lives, he was often away. … So, like many military spouses today, you’re essentially a single parent. Your job was to make a home wherever you were. Home was where we were as a family, wherever that was.”

A life of public service toward ‘America’s Promise’

Colin Powell was admired on the national and world stage.

But his reputation at senior government levels was tainted by his decision to lead the United States into a long, disastrous war in Iraq. As George W. Bush’s first secretary of state, he pushed faulty intelligence before the United Nations to advocate for the Iraq War, which he would later call a “blot” on his record.

After his four decades of public life in which he held roles as the nation’s top soldier, diplomat and national security adviser, he stepped down from his job as secretary of state in 2005. But he did not fade from public service.

He gave back to his alma mater, the City College of New York, through the Colin Powell School for Civic And Global Leadership, a nonpartisan educational, training and research center.

Alma Powell never sat on the sidelines, either.

Like her husband, she was an avid youth advocate, and she wrote two children’s books, “America’s Promise” and “My Little Wagon.”

“I simply had to the tell the story of America’s promise. And that was an easy way to do it,” Alma Powell said in an interview in 2017. “I very carefully made all the characters in my books animals so that we wouldn’t say we’re dealing with one child that looks like this. We are not worried about what you look like.”

She worked as chair of the board of directors for America’s Promise Alliance, helping unite educational, cultural, charitable and civic organizations to serve young people. She also served on President Barack Obama’s advisory board on Historically Black Colleges and Universities.

In a 2013 interview, Colin Powell remarked about his life.

Together, the Powells exemplify the selflessness and respect that can apply to any relationship, said Gillespie, the political science scholar.

“In a nation where according to the most recent figures from the American Psychological Association, the long-term probability of divorce is close to 50%, it is always heartwarming to see couples who are able to have long-lasting, healthy relationships,” she said.

Throughout his journey as a trailblazing soldier and diplomat, Powell did not walk alone. He had a partner in more ways than one.