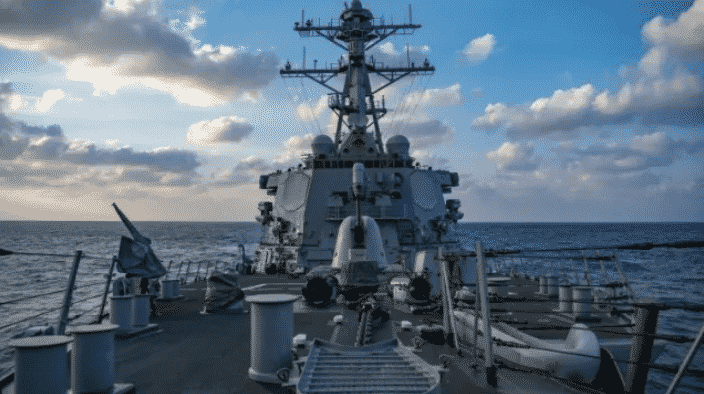 If Chinese warships did sail within the 200 mile Exclusive Economic Zone, it does raise alarm bells.

In what might be the beginning of a new era of tension and increased hostility between the U.S. and China, People’s Liberation Army warships were reported to have sailed near Alaska in what could be a clear effort to challenge or counter U.S. Navy Freedom of Navigation exercises in the South China Sea.

Chinese Warships off the Alaskan Coast?

The presence of Chinese warships off the Alaskan coast in international waters does not appear to be confirmed, however it is cited in a Chinese-government back newspaper called the Globaltimes.

“A website affiliated with the US Defense Department reported on Sunday that a naval flotilla of the Chinese People’s Liberation Army (PLA), featuring one of China’s most powerful warships, recently sailed in international waters near Alaska,” the paper writes.

However, the Global Times goes on to say “if the report is true,” a statement which of course introduces some questions as to whether this actually happened. Nonetheless, the Chinese-government backed newspaper is reporting this and discussing it as though it is true, quoting Chinese military officials discussing the patrol.

“If the report is true, activities by Chinese warships are likely a normal far-sea training amid the PLA Navy’s rapid development of such capabilities, Chinese analysts said on Monday, noting that this could also be seen as a countermeasure against US military provocations on China’s doorsteps in the name of freedom of navigation,” the Global Times reports.

The Chinese paper says the report where the information originated came from DoD’s Defense Visual Information Distribution Service release from the U.S. Coast Guard District 17. The Chinese report did offer some detail about a four-ship PLA Navy task force, saying the force included a guided missile cruiser, a guided missile destroyer and a general intelligence vessel with an auxiliary ship.

The PLA Navy task force, according to the Chinese report “sailed in international waters inside the US Exclusive Economic Zone, off the coast of the Aleutian Islands in Alaska, on August 29 and 30.

The Chinese ships reportedly did not sail within the 12 mile territorial sovereignty boundary of Alaskan waters, a stipulation according to the international United Nations Law of the Sea Convention.

However, if the report that the Chinese warships did sail within the 200 mile Exclusive Economic Zone, another boundary stipulated by the Law of the Sea convention to protect commerce for host countries several hundred miles off shore, that is indeed significant.

The Law of the Sea Convention, adhered to across the international community including the United States, says an EEZ is intended to ensure commercial business operations for several hundred miles off a given countries’ coastline. Therefore, any other countries wishing to conduct business within that region, to include things like commercial shipping or fishing, must receive the permission of the host country. However, the Law of the Sea does not prevent other countries from simply sailing through the area.

Whatever the actual mission or intent, a patrol of this kind certainly escalates longstanding U.S.-Chinese disagreement regarding territorial claims in the South China Sea.

For many years now, the U.S. has been sailing within the 12 mile territorial boundary of certain island areas China claims are theirs. However, the U.S. and large portions of the international community regard these as phony or illegitimate claims. The U.S. is not alone, meaning many allies regard the Chinese territorial assertions in the area to be unlawful, provocative, and illegitimate, particularly given that other Southeast Asian countries also have territorial claims in the region.

Of course added to U.S. and allied concerns is the fact that China has been conducting phony island building operations in the region, described by the Pentagon as illegal land reclamation, to bolster its territorial claims.

China ICBM Missile Production: Implications for the US Nuclear Deterrent