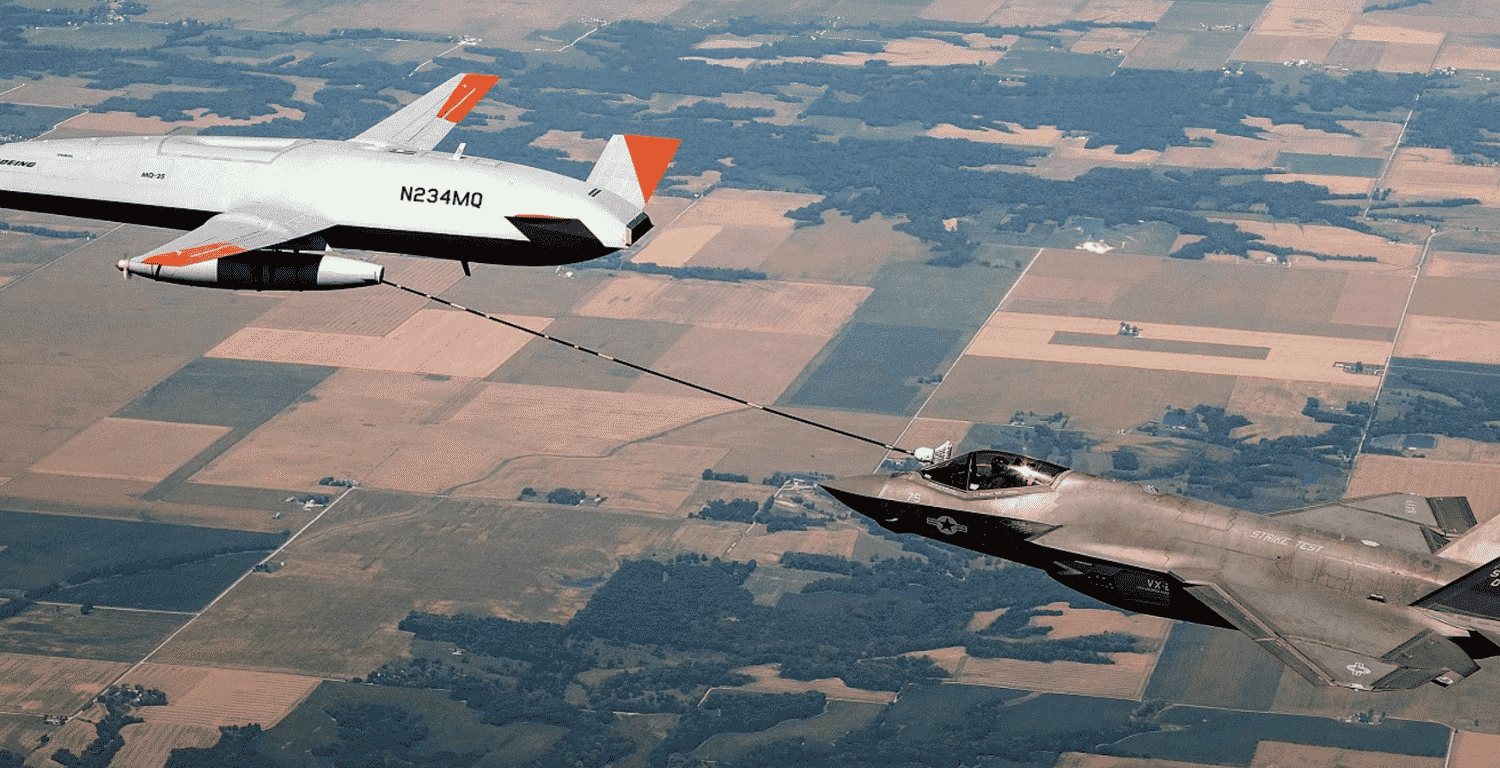 What would it mean to the U.S. Navy’s ability to project power if its carrier-launched F-35C could instantly double its combat radius and attack range, increase dwell time over targets and launch offensive operations from more survivable, distant maritime locations?

The Navy is about to find out, as the service recently conducted its first-ever aerial refueling of the F-35C using a test model of the emerging, first-of-its-kind carrier-launched refueler drone called the MQ-25 Stingray.

While the test flight took place over St. Louis in mid-America, the intent of course is to prepare the integrated aircraft attack and refueling system for maritime warfare and aircraft carrier attack.

From the ground control station, an air vehicle operator then initiated the fuel transfer from T1’s aerial refueling store to the F-35C,” a Navy report said.

The F-35 flight was the third actual refueling flight for the T1, as it has already refueled an F/A-18 Super Hornet and E-2D Advanced Hawkeye.

“Conducting refueling test missions with various aircraft allows the program to analyze data and determine if any adjustments to guidance and control are required,” the Navy report added.

While perhaps seemingly uneventful in some ways, the aerial refueling of a carrier-launched F-35C carries enormous implications in a number of key respects.

First just considering the refueler itself, the MQ-25 Stingray is a carrier launched drone, something made possible through massive amounts of Navy research, testing and experimentation. Landing a drone on a carrier is an extremely complex task as an aircraft must operate amid changing sea states, fluctuating weather conditions and of course take-of-and-land from a large moving carrier.

After years of effort, this technology is here.

This mean maritime power projection refueling can operate with an organic, built-in capability, meaning it does not have to rely upon large, non-stealthy land launched tankers such as a KC-46.

Not only is a KC-46 much less survivable as a large, non-stealthy fixed wing aircraft, but of course it must launch from land, a circumstance which complicates its access, reach and take off points from which to support ocean-launched aircraft.

An air-refueled carrier-launched F-35 not only simply increases attack range but brings great Intelligence, Surveillance and Reconnaissance value as well. Given that the F-35 operates with drone-like sensors surrounding the aircraft and ability to share targeting data in real time as an aerial node, a carrier-launched drone could massively extend dwell time for the aircraft to support targeting, data sharing and surveillance missions.

An aerial refueling of an F-35 in and of itself might not seem particularly consequential, as fighter jets have been refueled from the air for decades. However, what if it were a carrier-launched Navy F-35C which could be refueled over the ocean by a carrier-launched refueler drone? That does change things.

It opens up an entirely new sphere of mission possibilities to include additional surveillance, targeting, networking and offensive strike capabilities.

At the same time, it also accomplishes the specific and extremely critical task of being able to attack from beyond the striking range of a particularly deadly Chinese “carrier-killer” missile reported to be able to strike ships as far as 1,000 miles off shore. Of course carriers increasingly have layered defense systems with new weapons which could potentially include laser interceptors, EW missile guidance jamming systems and various ship-fired or ship-mounted interceptors.

Navy leaders say with confidence that carriers will be able to operate from wherever needed, despite threats posed by Chinese guided anti-ship missiles. Nonetheless, the range extension for ocean-launched F-35Cs is extremely significant as it gives commanders a much greater range of tactical attack options as well as additional survivability.

According to Lockheed Martin information, the F-35C operates with a combat radius of roughly 500 to 600 nautical miles, meaning once it travels that distance, it must turn around and return if not refueled.

Looking simply at the math, if a Chinese DF-21D anti-ship guided missile can travel as far as 900 to 1,000 nautical miles, then an F-35C might not be in striking range of an enemy land target if the carrier had to operate more than 1,000 miles offshore. An F-35 could not get to its target, were it to take off 1,000 miles away, as it would need to turn around before arriving over a target area. An F-35 refueled from the air, however, could not only reach the skies above land targets but operate with dwell time sufficient to search for targets and respond to new intelligence should new targets emerge.

Now in the case of the Chinese DF-26, the circumstances could be a little different, given that that weapon can reportedly hit ranges as far as 2,000 miles off shore.

However, given that the F-35 can function as a proven aerial ISR node able to locate targets and share data from beyond the horizon at extremely significant distances, having double the range of an F-35C introduces an entirely new sphere of networking possibilities.

An F-35C could operate as a surveillance node within a broader multi-domain network such that it could cue other aircraft, alert surface ships of approaching targets and even help guide long-range missiles to their targets.

Jelani Day will be buried today. His family is still looking for answers on what led to his death