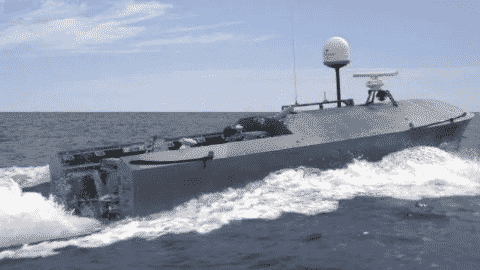 SMALL: We are integrating larger USVs and Medium USVs into the architecture, as a large part of a future surface combatant force. We are developing a single integrated combat system shared across the entire combat portfolio. We are focusing on endurance, autonomy, precision navigation and command and control.

Warrior Maven: What are a few of your plans for the new LUSV and MUSV? Will they purely be drones?

SMALL: We will integrate large and optionally manned USVs in with the fleet. We are developing a fleet of modular large, medium and small craft which we will ultimately attach payloads to. Each of these will have a defined interface.

Warrior Maven: How would you describe your developmental strategy? Will AI figure prominently?

SMALL: What I want to do in a program manager is be able to adapt and upgrade platforms to bring new technology to bear as it developers. This will prevent getting the sensors, payloads and platforms and that autonomy so intertwined — so that when we do make those breakthroughs in machine learning and AI we will be able to incorporate it into a whole portfolio of platforms and systems.I am interested in the people who are developing that technology because we are going to need it – but if it’s too expensive and if the architectures aren’t right, you can’t take advantage of that technology.We have started a dialogue with industry to define requirements.

Warrior Maven: How will these new surface drones integrate with the Navy’s ongoing Ghost Fleet effort?

SMALL: We are working on integrating payloads with USVs and are going to demonstrate and learn about integrating payloads while doing command and control. In an autonomous vehicle you have different layers of autonomy. You need autonomy to turn the engine on and off, operate mechanical and electrical equipment and perform automated command and control.

Warrior Maven: I understand these new ships will inter-operate with existing mine countermeasures platforms, such as the smaller and now-in-development Mine Countermeasures Unmanned Surface Vehicle. There are emerging undersea drones now able to somewhat autonomously track and explode enemy mines. How is that progressing?

SMALL: With the MCM USV discussion and program, there’s a sweep payload first, a hunting payload second and then a third neutralizing payload. Right now we are developing the Barracuda, which is an example of a modular craft. We are bringing someone else’s payload to bear, and we will develop the middleware to marry up a neutralizing round with that unmanned capability.