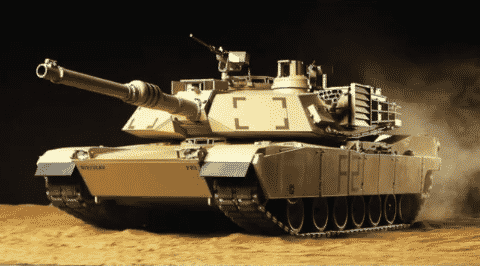 (Washington, D.C.) The U.S. Army’s new Optionally Manned Tank will likely be a lightweight, expeditionary and maneuverable ground vehicle, yet many options remain on the table as the service immerses itself in the conceptual development phase.

As the service prepares for a 2023 decision about a possible path forward, the principle quandary likely being entertained right now is whether something faster with less armor can actually be survivable enough to operate in heavy mechanized warfare in a manner comparable to or greater than the Abrams?

If it cannot survive the kinds of attacks and incoming fire an Abrams is built for, will it have enough active protection? Long range sensors? Fire power range, reach and guidance technology? The course chosen by the Army will likely rely upon what kinds of answers there may be to these questions.

Nonetheless, the considerations point to the aforementioned possibility that perhaps a new optionally manned tank can complement and fight alongside a heavily armored tank, that is if there are not lightweight composites or any technical breakthrough sufficient to architect a lighter vehicle equivalent or superior to an Abrams in terms of survivability.

Specifics related to these questions may not be available, for obvious and understandable security reasons, yet there is evidence in the Army current path forward, which is to both massively pursue Abrams upgrades and sustainment while concurrently pursuing a new tank-platform for the future. The answer may be both, based upon the evidence thus far.

One significant idea bearing upon these kinds of evaluation relates to a concept described to me by Army Futures Command Commander Gen. John Murray, and that is that should unmanned technology sufficiently evolve to enable breakthrough levels of autonomy, a future tank might not need to be survivable as it will carry no soldiers.

The technology for advanced algorithms needs to advance a bit more before new levels of autonomy are operational, Murray said, yet progress is underway and rapid progress continues to hit new breakthroughs on a regular basis. Also, certain kinds of autonomy are already here and demonstrating great promise in Army testing and experimentation.

As far back as a year or two ago, Army Futures Command demonstrated that an armored robotic vehicle could “breach” an enemy tank ditch while soldiers themselves operated several hundred meters behind.

The advantage here is extremely significant, as the most dangerous, high-risk and life-threatening circumstances can increasingly be handled by unmanned systems, freeing up human decision makers to make optimized decisions about improved methods of attack. Once a tank ditch is handled, crossed or removed as an impediment, or early rounds of incoming enemy fire are confronted, infantry and heavily armed manned vehicles can approach or “close with an enemy” with a much greater tactical advantage increasing the prospect for mission success.

This does not mean, Murray suggested, that the unique attributes of human cognition will be replaced or unnecessary in any capacity, but rather than advanced, AI-enabled algorithms will increasingly be able to support long-range manned-unmanned teaming and information connectivity between manned vehicles and forward operating drones.

Perhaps a manned Abrams will bring its heavy armor, survivability and firepower to war, while performing command and control operations and making decisions for an ultra high-tech future Optionally Manned Tank to fight alongside it. This might make a lot of sense, as a robotic tank could move faster, deploy more easily and surge forward into incoming fire with no risk to soldiers. Yet the platform could be supported by human decision makers in a heavily armored tank operating nearby.

Advances with the Abrams tank, for instance, might favor this kind of conceptual thinking, especially if a new generation of Forward Looking Infrared Sensors enable tanks to find, track and attack enemy targets at safe standoff distances before it is seen.

“We use artificial intelligence to reduce the cognitive burden on the human to allow the machine to do what it does best and allow humans to do what they do best on the battlefield. What is the essence of decision-making when it comes to assessing those items that are not exactly tangible? Where there is not a ones and zeros solution…and answers come through with experience and anticipation. Currently, humans are better at game theory than machines,” Maj. Gen. Ross Coffman, Director, Next Generation Combat Vehicle Cross Functional Team, Army Futures Command, told Warrior in an interview.

At the same time, as indicated by Coffman, less tangible or more subjective variables vital to warfare decision making go well beyond the capacity of 1s and 0s. There are many elements of decision making which, for instance, pertain to psychological nuances, emotional considerations regarding the level of risk to soldiers and interwoven factors such as how to respond to several new developments intersecting at once.

In essence, there are circumstances wherein human reasoning and cognitive processes place humans in a much better position to make determinations. Warfare maneuvers involve degrees of risk taking, damage assessment possibilities and even some informed speculation which might create a need to make decisions which exceed or venture beyond the analytical capabilities of mathematically-oriented machines and advanced algorithms.

“Currently humans are better at game theory than machines,” Coffman told me.

These things considered, the fast-advancing capabilities of AI are staggering. For example, AI-enable systems can increasingly analyze a variety of variables all in relation to one another in seconds, drawing upon a seemingly limitless database of catalogued data. How might weather conditions inform or alter operational considerations? How does this relate to surrounding terrain? In past scenarios, which kinds of maneuvers or counterattack choices proved most effective against enemy attacks.

An AI system is only as effective as its database, yet advanced algorithms are increasingly able to discern how things like weather, terrain, incoming enemy fire and past operations can all inform choices in a fast-evolving new situation…and this can be done in seconds. So the way this works is that optimal courses of action, based on instant, yet extensive and extremely sophisticated analysis, can be presented to human decision makers.

In terms of how this might be applied, some of Coffman’s discussions about preparing for specific geographical or enemy conditions can be greatly informed by AI. Geographical specifics in places like Eastern Europe, for example, can be catalogued and analyzed in relation to an armored attack. Computer databases can aggregate, distill and analyze geographical conditions with a specific mind to how they may impact warfare maneuvers. Coffman explained that knowing the terrain in Eastern Europe, for example, could prove extremely useful.

What might all of this mean when it comes to the future of the Abrams tank? Has it reached the end of the line in terms of upgrade potential? The answer seems to be no, in large measure due to the series of aforementioned factors such as high-speed computing, long-range thermal sights, ammunition datalinks and perhaps most of all, the impact of AI-capable technologies.

Apart from a few external design configurations related to things like the vehicle chassis, turret and 120mm cannon, today’s Abrams is an entirely new vehicle when compared with its inception, or even a few years ago.

The Abrams will operate with an ability to attack at longer ranges, control unmanned systems, integrate new generations of survivability-enhancing Active Protection Systems and gather, analyze and transmit targeting data and other vital information in seconds. This changes combat.

For example, many likely remember reading about the now famous Gulf War tank battles which were in large measure won with advanced thermal sights. U.S. Army Abrams tanks were able to see and destroy Iraqi T-72s before they were seen themselves, allowing them to attack and hit enemy tanks without facing incoming attack.

Advanced Abrams tanks take this kind of technology to yet a much greater, paradigm changing level in terms of range, image fidelity, an ability to track multiple targets at once and draw upon AI-enabled target analysis.

Moving into the future, an Abrams will be able to possibly operate smaller, faster, armed robotic vehicles moving ahead to enemy contact, while receiving and analyzing real-time video feeds and data from overhead drones and even surveillance planes. Then, as was already demonstrated last year during the Army’s Project Convergence exercise, AI-empowered computer systems can instantly perform analyses to pair sensor-to-shooter and tell human decision-makers which weapon, counterattack or operational response is best suited to the specific conditions of a given combat circumstance.

Perhaps there is a drone attack coming from an urban area or enemy infantry moving through a friendly population? An AI system would discern all of these variables, factor in weather, geography, potential impact to civilians and compare it against an established database. The computer database will not only be able to bounce new variables off of what has worked in the past for similar scenarios but, for example, potentially recommend a non-kinetic solution such as an EW system to jam a drone or laser to pinpoint approaching enemy vehicles to reduce explosive fragmentation and limit damage to civilians. A human decision maker can then be informed of an optimal method of attack, based upon a massively integrated, yet immediate computer analysis.

All of this means platforms such as the Abrams, especially when upgraded with AI-capable systems, an ability to operate drones and an instant capacity to receive, aggregate and analyze incoming sensor data, can continue to bring an unparalleled advantage to the battlefield.

These advantages for the Abrams are fortified by a large number of current and ongoing upgrades to the Abrams tank v3 and v4 variants. These include a number of things such as ammunition data link, auxiliary power units to support a huge increase in computing, electronics and on-board power, multi-purpose, programmable ammunition able to function as a High-Energy Anti-Tank round, sabo round, kinetic energy round or canister round as needed. This reduces the logistical footprint and massively increases lethality. This kind of tactical approach, performed by an Army AI system called Firestorm during Project Convergence, emerged due to the instant organization and analysis of data from mini-drones, satellites, ground vehicles, helicopters, large drones and even dismounted infantry … at one time.

A decision making process made exponentially faster, reducing attack time from 20 mins to 20 secs, can give a strategic advantage to even a much smaller force,” Maj. Gen. Ross Coffman, Director, Next Generation Combat Vehicles Cross Functional Team, Army Futures Command, told me in an interview.

“You must possess the capability to fight outnumbered and achieve victory,” Coffman said.

Coffman explained that all of these factors, investments and areas of technological focus pertain to specific calculations regarding potential enemy forces.

“We cannot modernize to parity, we must modernize to overmatch. We must look at what our potential adversaries are investing in and then project what the capabilities will be,” he told me.